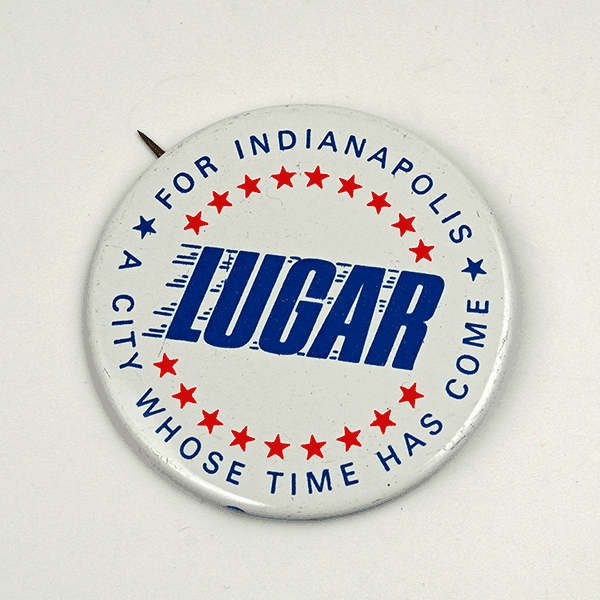 Exhibits The Making of a Mayor

In November 1967, Richard G. Lugar was elected Mayor of Indianapolis. Less than five years later, he was standing at a podium in Miami Beach, delivering the keynote address at the 1971 Republican National Convention. As Mayor of Indianapolis, he had confronted issues of racial segregation, economic decline, and population loss, and responded with innovative efforts in planning, funding, and governmental reform. These initiatives not only contributed to the economic growth of Indianapolis, but also increasingly drew international attention to the city's young mayor.

Exhibits The Making of a Mayor

Richard G. Lugar thrived at Denison University in Granville, Ohio, graduating in 1954 at the top of his class. In addition to an outstanding academic record, Lugar served as Co-President of the student body (his fellow Co-President was Charlene Smeltzer, whom he would marry in 1956). Lugar would again serve as a student leader at Pembroke College, Oxford University, which he attended with the prestigious and coveted Rhodes Scholarship.

Lugar entered public office in 1964 as an elected member of the Indianapolis Board of School Commissioners. Three years later, with the support of the Republican Action Committee, Lugar ran for mayor and defeated Democratic incumbent John J. Barton. Click the play button to hear the audio for a Lugar campaign advertisement. The catchy jingle was played on radio and television, in 28-second and 58-second (available here) formats.

UniGov and Other Achievements of the Lugar Administration

In September 1969, nearly two years after entering the Mayor's office, the Lugar Administration prepared a statement highlighting its achievements thus far. The summary emphasized Mayor Lugar's efforts to address critical problems facing Indianapolis and other urban centers by reforming how local government operations were organized and funded. UniGov--the consolidation of Indianapolis and Marion County Governments--stood squarely at the top of their list, although its implementation would not be official until January 1970. Other achievements included the Administration's work to build public-private partnerships through programs and advisory task forces. To learn more about UniGov, see the feature UniGov: From City to Metropolis.

During his first term in office, Mayor Lugar drew national attention for overseeing the implementation of UniGov and attracting both federal funding and private investment in Indianapolis. Richard Nixon's election in 1968 only heightened Lugar's visibility. In February 1970, Richard Nixon visited Indianapolis (which was then the largest city in the country with a Republican mayor), bringing with him several cabinet members to discuss how his vision of New Federalism might shape national urban policies. Nixon also appointed Lugar to the U.S. Advisory Commission on Intergovernmental Relations, furthering the young mayor's prominence.

A New Arena in Downtown Indianapolis

The Indiana Pacers were a successful franchise in 1971, when Mayor Lugar announced plans to build the Market Square complex, including a new arena for the team. Led by star players like Bob Netolicky and Roger Brown, the Pacers had won a league championship in 1970 and a division title in 1971. As Mayor (and later as Senator), Lugar advocated locating sports facilities in the central city as a way of drawing civic pride, revenue, and business investment to downtown Indianapolis.

In 1970, Lugar was elected president of the International League of Cities, an organization advocating urban issues and providing education to municipal leaders. During that same year, the Mayor was invited to represent U.S. cities at a meeting of the North Atlantic Treaty Organization (NATO) focused on urban affairs. In 1971, Indianapolis played host to an international Conference on Cities, sponsored by NATO, the National League of Cities, and other organizations concerned with urban issues. Publicity from these events as well as from Lugar's innovations--particularly in municipal reorganization (UniGov), intergovernmental collaborations, and public-private partnerships--continue to draw positive attention to both the city and its Mayor.

In 1968, just a few months after Lugar's first election as Mayor, the U.S. Justice Department filed a lawsuit against Indianapolis Public Schools (IPS) for violating the Civil Rights Act of 1964 through its racially segregated school system. The case was tried in 1971 and IPS was found guilty of de jure segregation. Issues of race relations, segregation, and busing played a major role in the 1971 race for mayor. In the midst of the campaign, African-American business leader and physician Frank P. Lloyd Sr. spoke out against the racial politics used by John Neff, who was the Democratic nominee running against Lugar for mayor.

Re-Election of a Mayor

The campaign of 1971 was marked by two central themes: UniGov and the response to segregation in Indianapolis Public Schools. Since its proposal, UniGov had been criticized by several African-American leaders as an effort to undermine African-American political power, by bringing predominantly white suburban voters into the Indianapolis voting district. In 1971, Lugar's Democratic opponent, John Neff, called UniGov a "power grab"and used racial politics to leverage votes among African Americans. Both strategies failed, as Lugar won approximately one-third of African-American votes (significantly more than previous Republican candidates) and claimed an overwhelming victory, with a winning margin of more than 50,000 votes of the approximately 250,000 votes cast.

A Rising Star in the Republican Mayor

With a decisive re-election victory and increasing national recognition, Lugar's supporters described the Mayor as a rising star in the Republican Party. This pamphlet, published shortly before his keynote address at the Republican National Convention, promotes Lugar's national notoriety and highlights his activities and appearances outside of Indiana.

The young Mayor was recognized for his contributions to public policy and the Republican Party with the coveted honor of delivering a keynote address at the Republican National Convention in 1972. His appearance at the RNC furthered speculation about his potential as a future presidential or vice presidential candidate.

Running for the Senate

Running for the Senate Toward the end of his second term in the Mayor's office and in the wake of the Watergate scandal, Lugar ran for U.S. Senate against popular Democratic incumbent Birch Bayh. L. Keith Bulen managed the campaign, as he had done during both of Lugar's mayoral races. In this instance, however, Lugar was not successful and he narrowly lost to Bayh in what proved to be a tough year for Republicans throughout the country.

On January 1, 1976, Richard G. Lugar left the Mayor's office, having decided not to seek a third term. Instead, he accepted a faculty position at Indiana Central University (now University of Indianapolis), where he taught Political Science, while also running a second campaign for U.S. Senate. As can be seen in this fundraising pamphlet sent to supporters, the campaign had to adapt to newly passed campaign finance laws, several of which had been enacted in the years following the Watergate scandal. In November 1976, Lugar defeated Democratic incumbent Vance Hartke in a landslide, beginning a 36-year Senate career. Among his more recognized achievements as Senator, Lugar worked with Democratic Senator Sam Nunn in the dismantling of nuclear, biological, and chemical weapons, most notably arms stockpiles in nations with unstable political and military leadership.