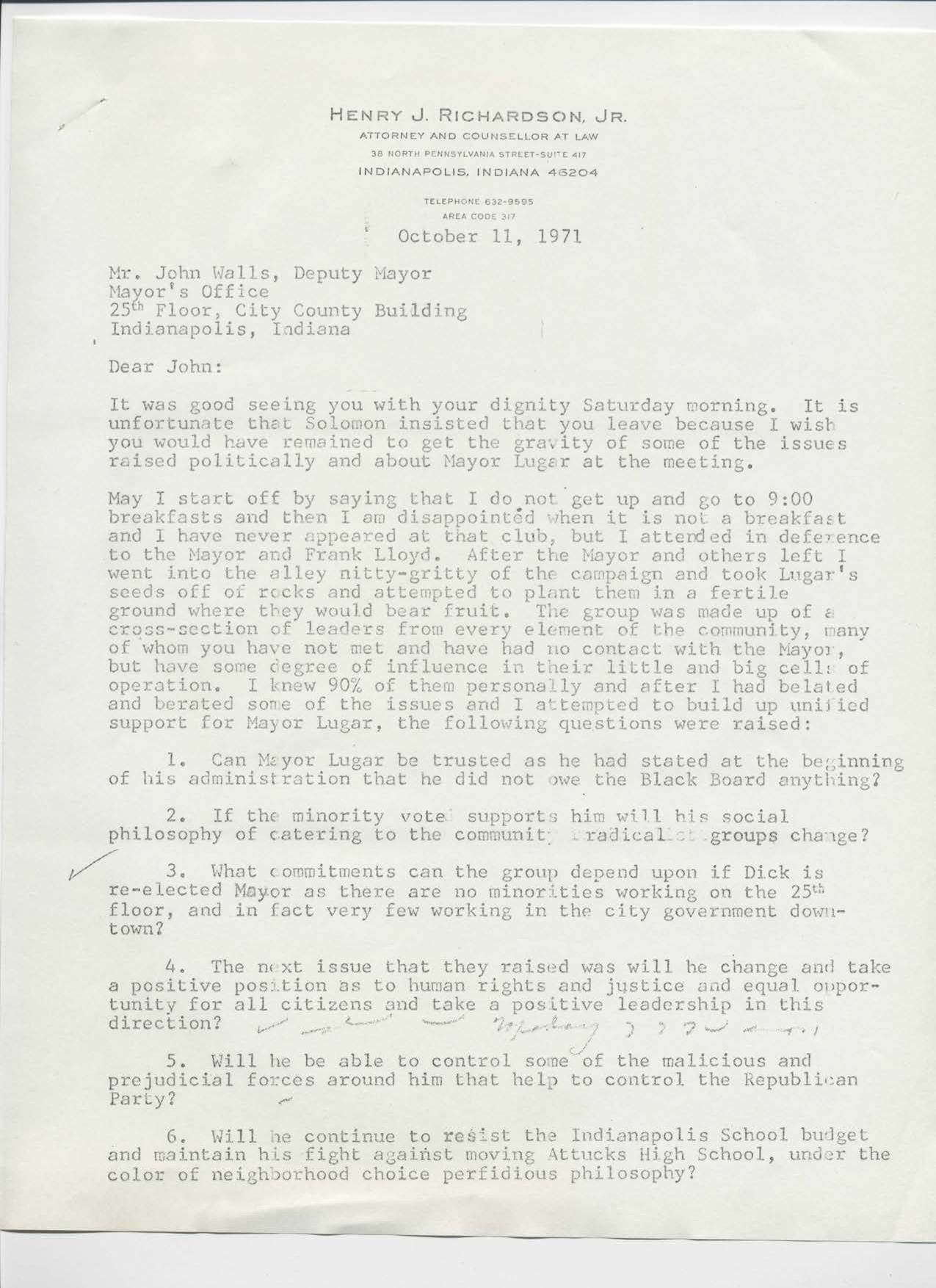 Richardson writes to Deputy Mayor John Walls about race and the 1971 election, outlining questions raised by voters about the stance Mayor Lugar's administration would take on various issues if reelected. 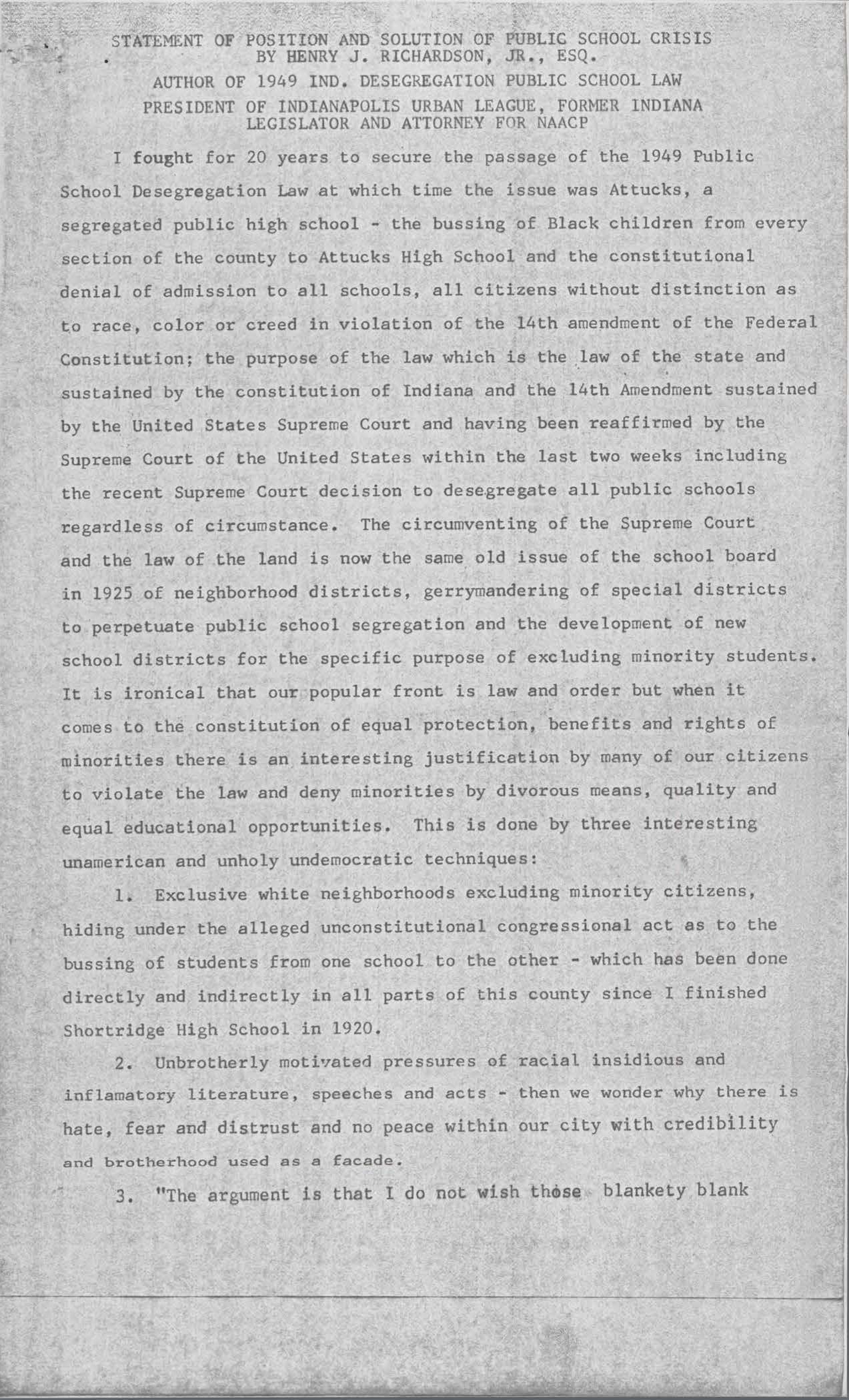 Statement of Position and Solution of Public School Crisis 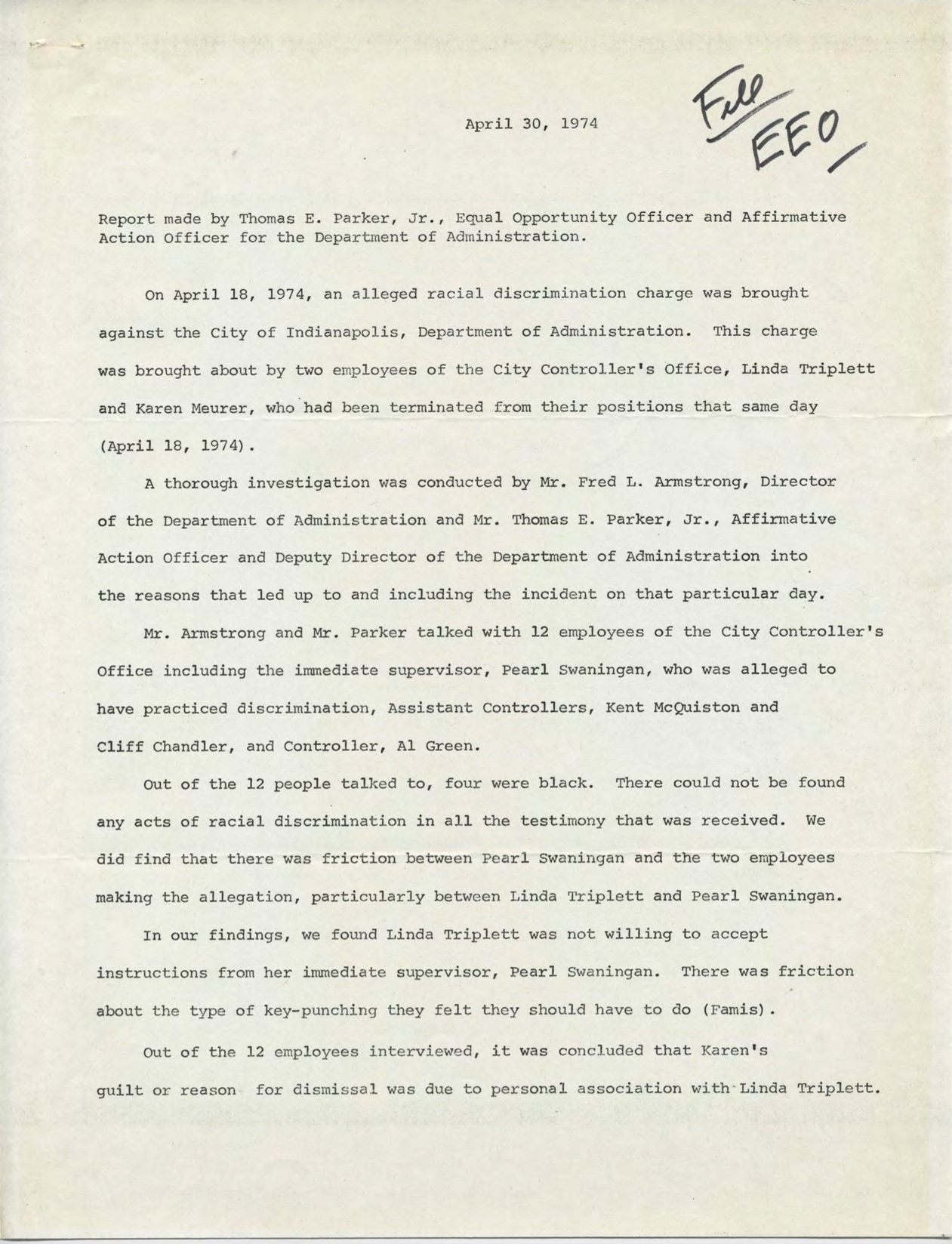 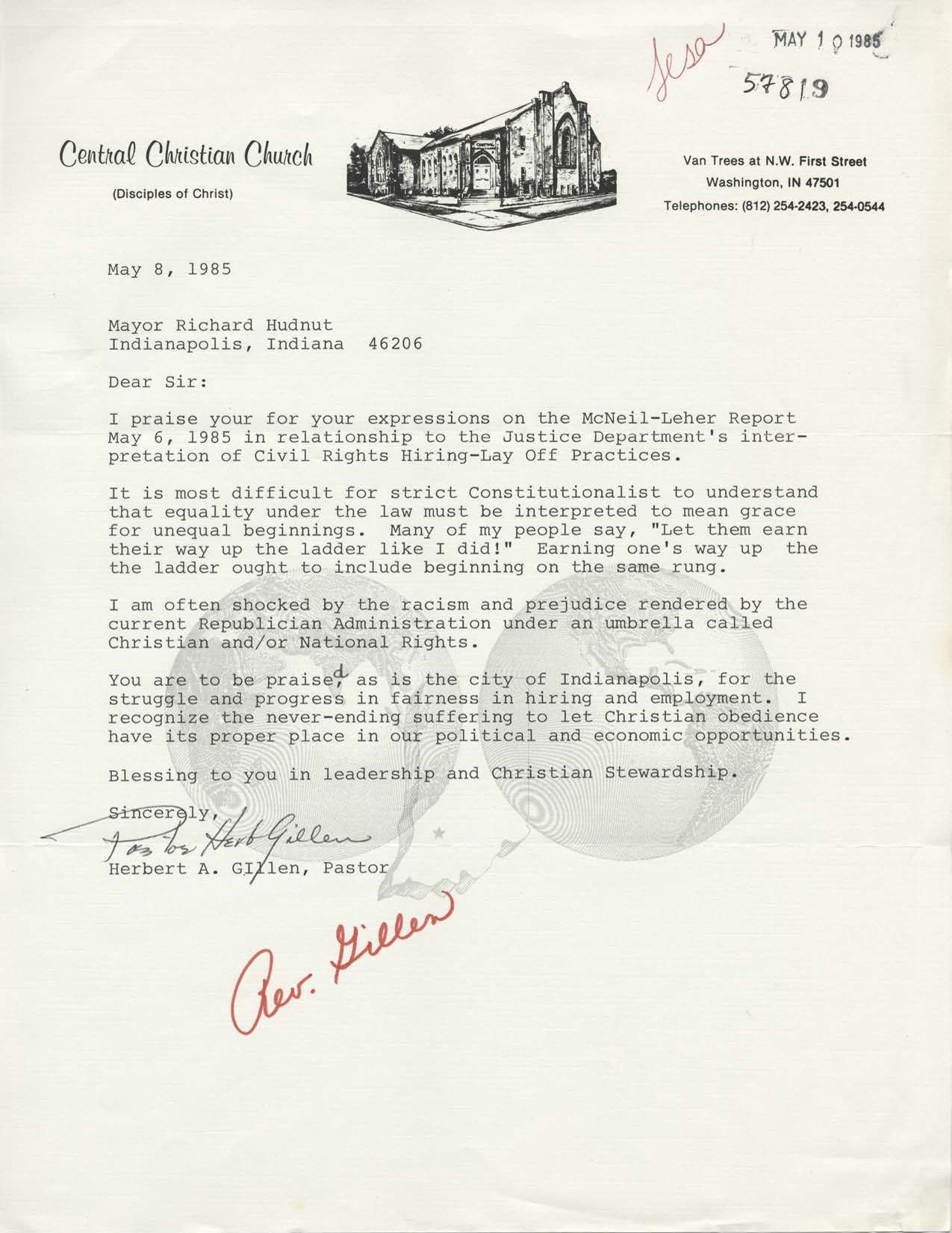 In the spring of 1985, Mayor Hudnut appeared on several television shows defending the city of Indianapolis' affirmative action policies against a suit filed by the Department of Justice. Hudnut received hundreds of letters like this one, both those in favor of and opposed to affirmative action, from citizens in Indiana and across the country. 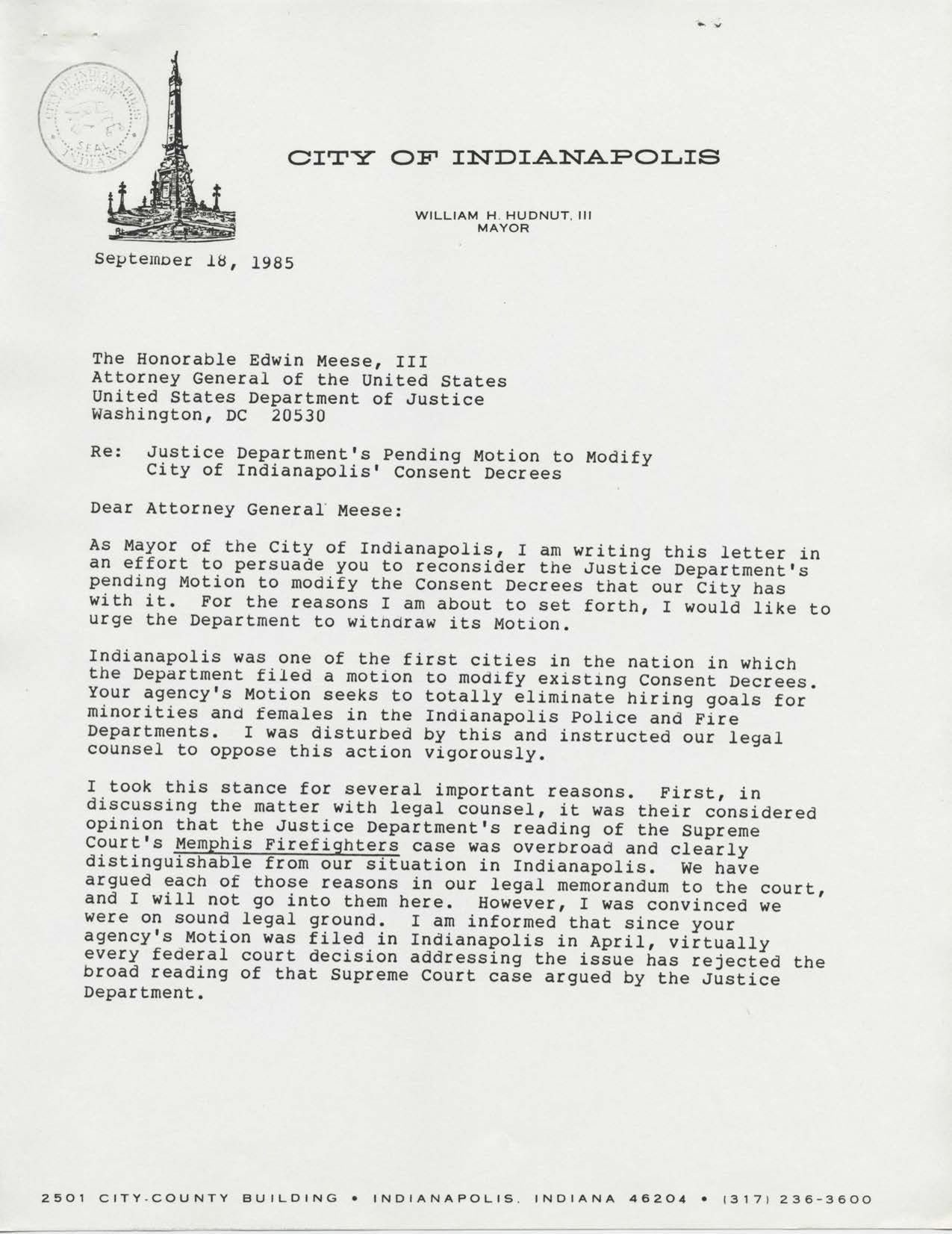 In this letter, Mayor Hudnut writes to Attorney General Edwin Meese in defense of affirmative action policies in the Indianapolis Fire and Police Departments and urges the AG to reconsider the federal government's suit to end the program. 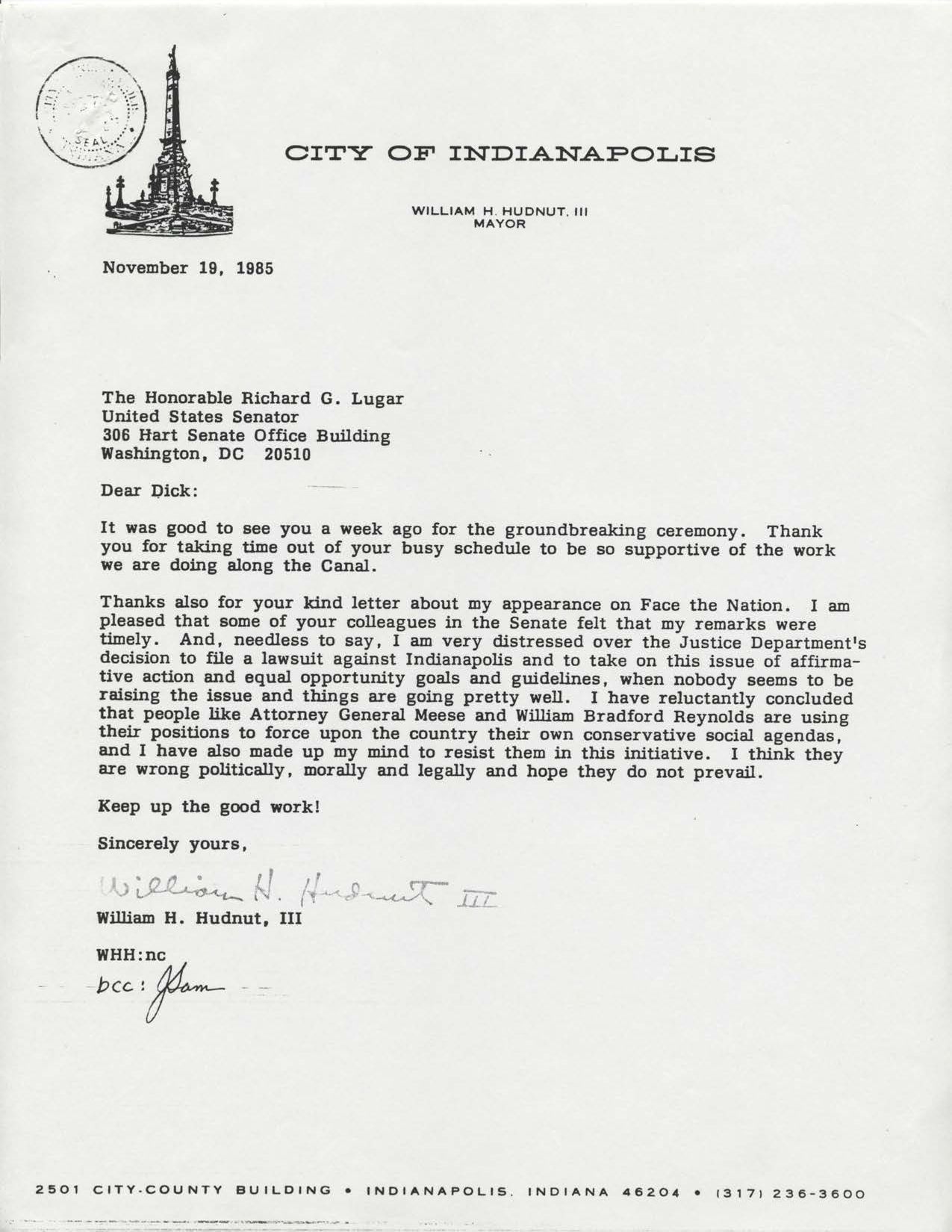 Mayor Hudnut writes to Lugar lamenting the Justice Department's decision to file a lawsuit against Indianapolis and its affirmative action and equal opportunity goals. 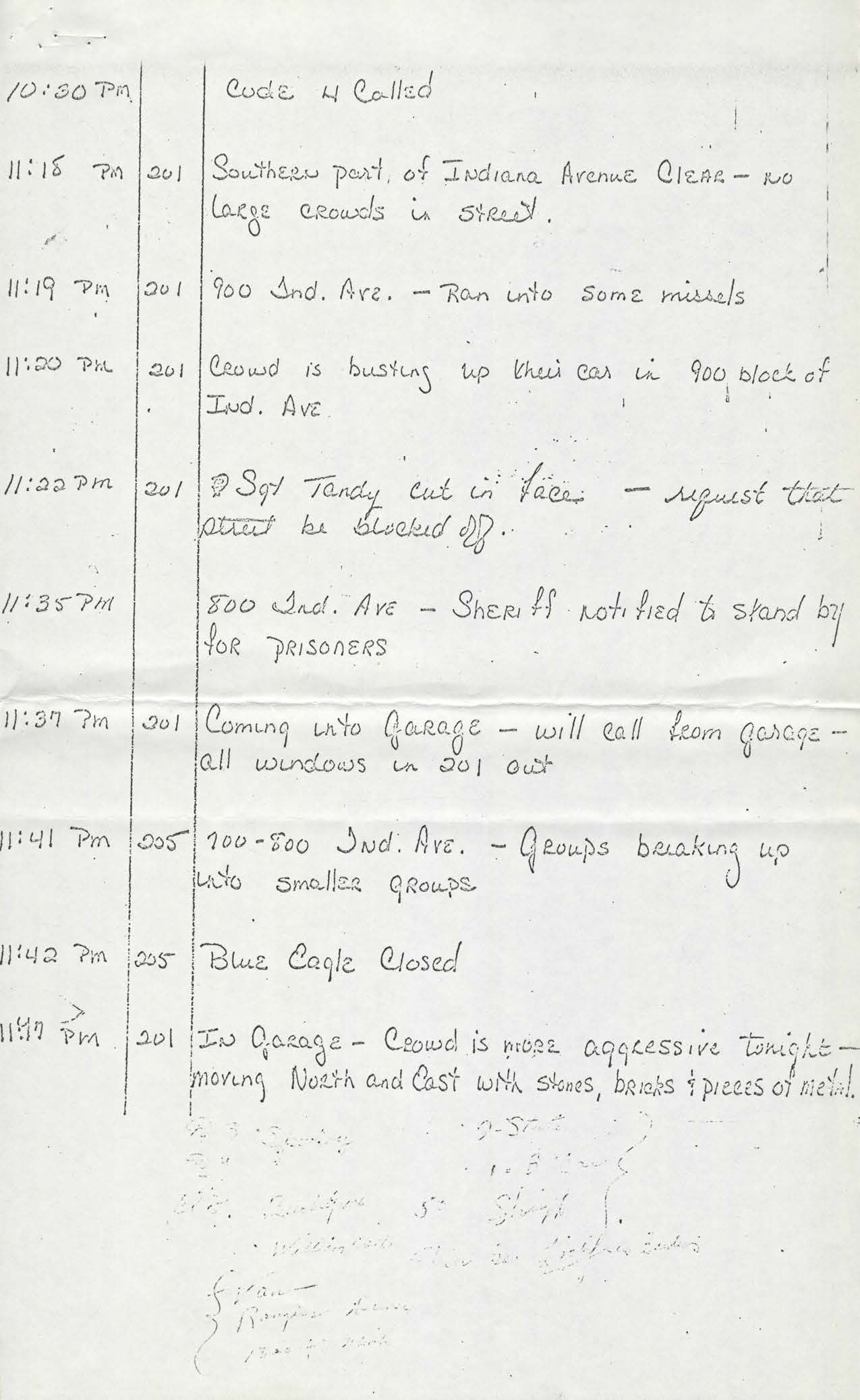 This copy of a handwritten document from the Indianapolis Police Department provides a chronological list of unrest related to black power near Indiana Avenue. 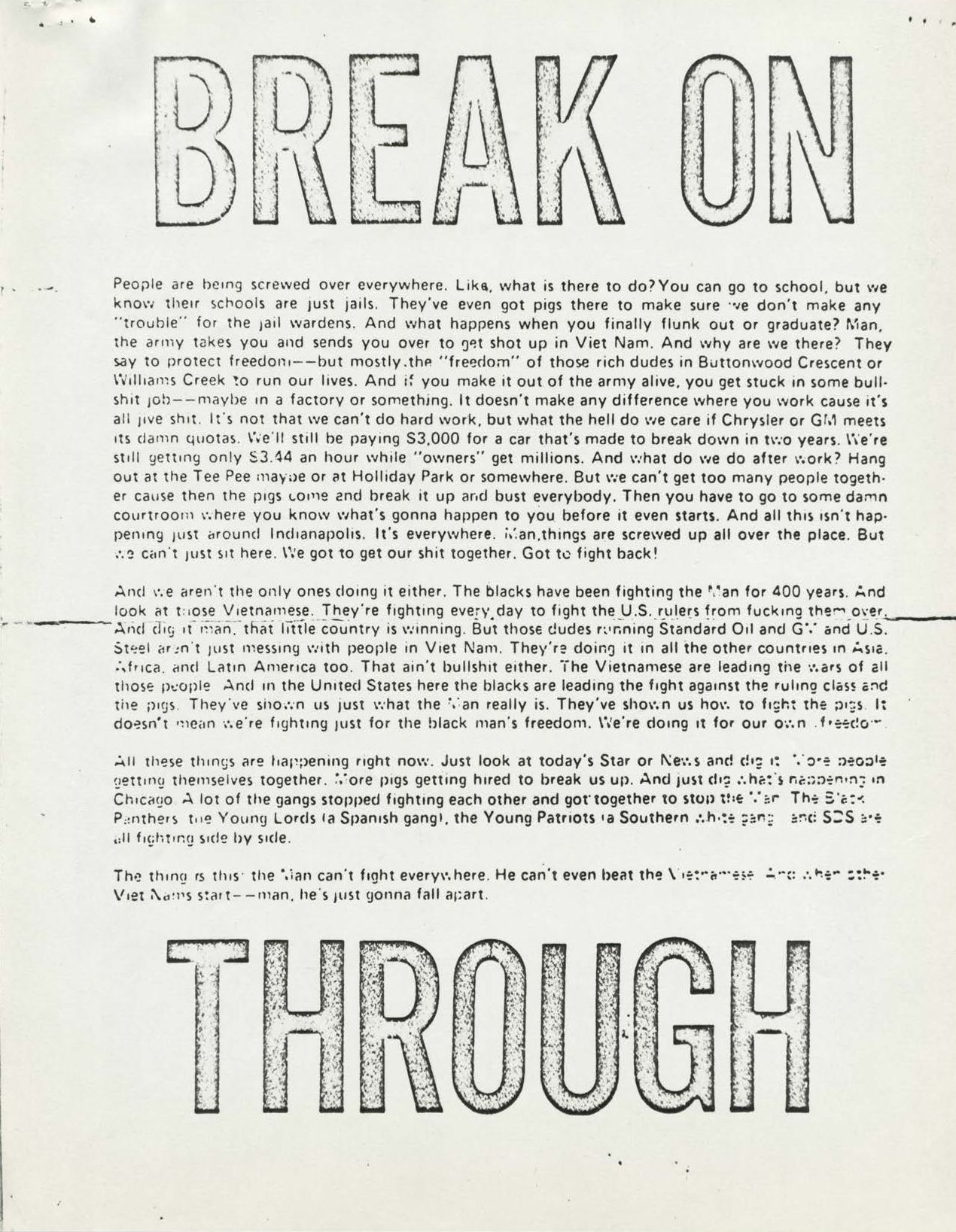 This flyer, likely issued by the Black Panther Party, speaks out against the Vietnam War, big business, and the military draft among other issues. 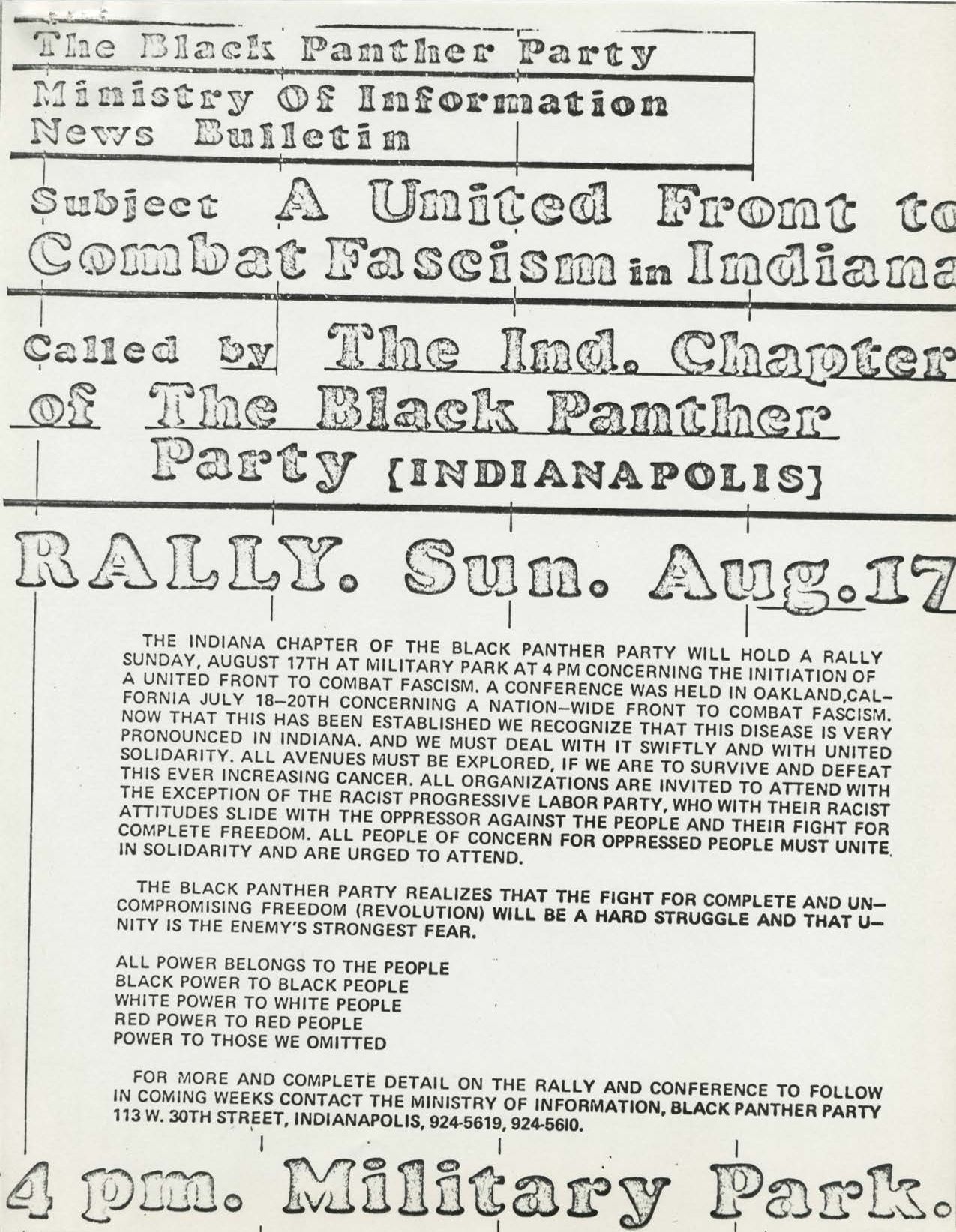 This flyer advertises a Black Panther rally at Military Park in Indianapolis on August 17, 1969 to combat what the party views as fascism in Indiana. The flyer invites all people concerned about oppressed people to attend the rally, although it has strong criticism for the Progressive Labor Party. 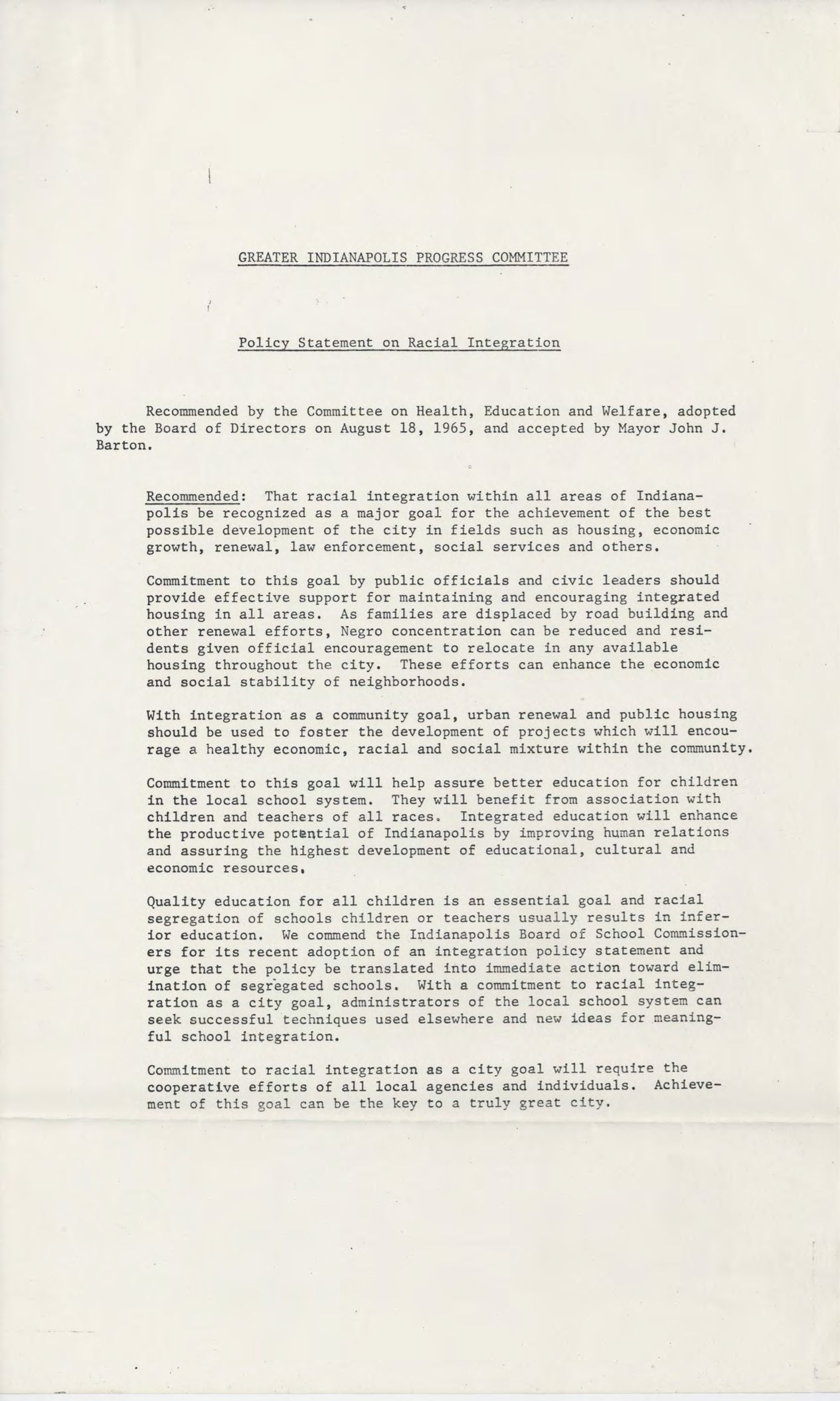 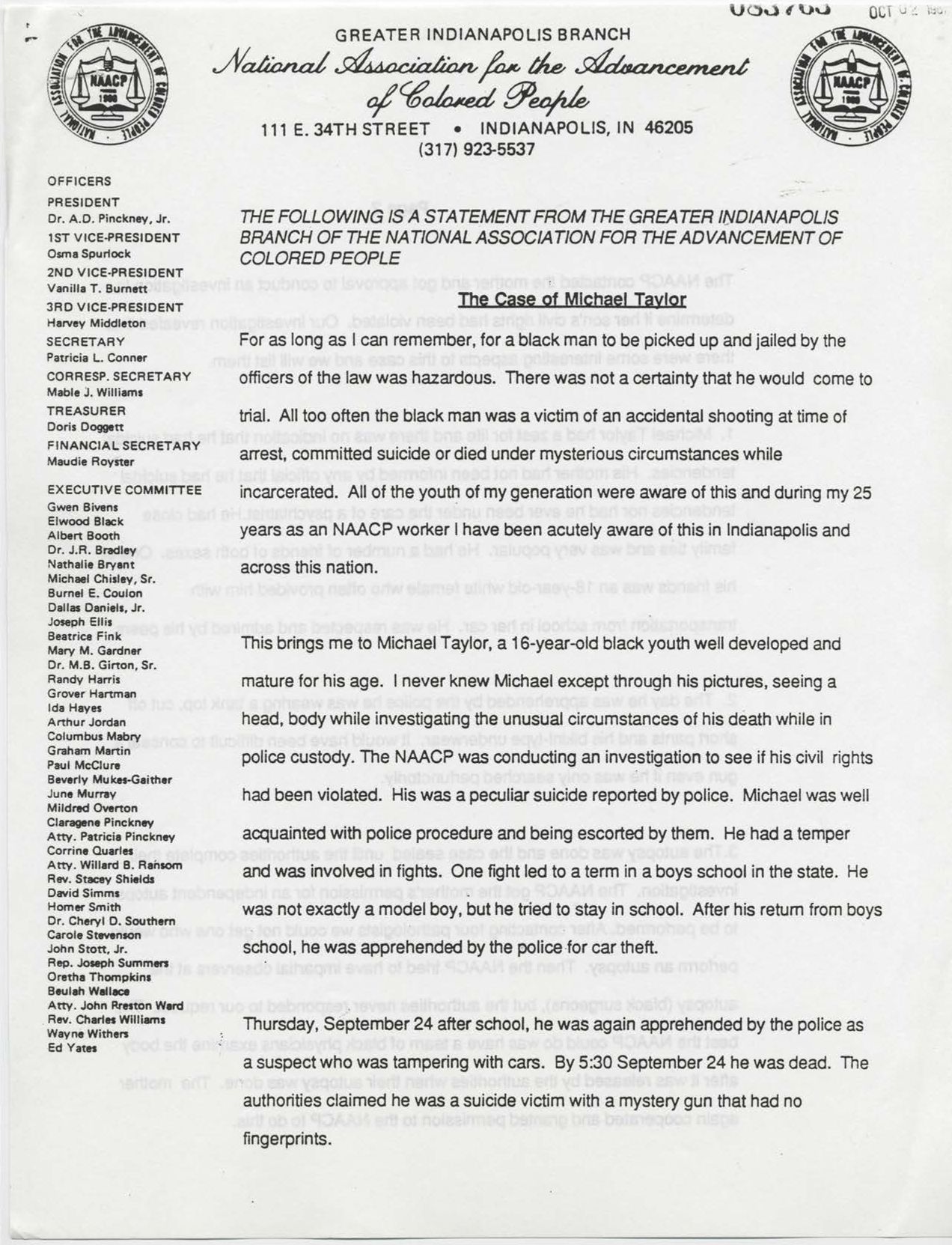 A statement from Indianapolis NAACP President A. D. Pinckney about the shooting of Michael Taylor, a 16-year old black teen who died while in police custody.

Abdulrasheed, an African American citizen in Indianapolis, writes to Mayor Hudnut about the shooting of Michael Taylor. Abdulrasheed references unrest in other cities and the 1969 riots on Indiana Avenue and says that he hopes Hudnut will help to bring out the truth in this case. 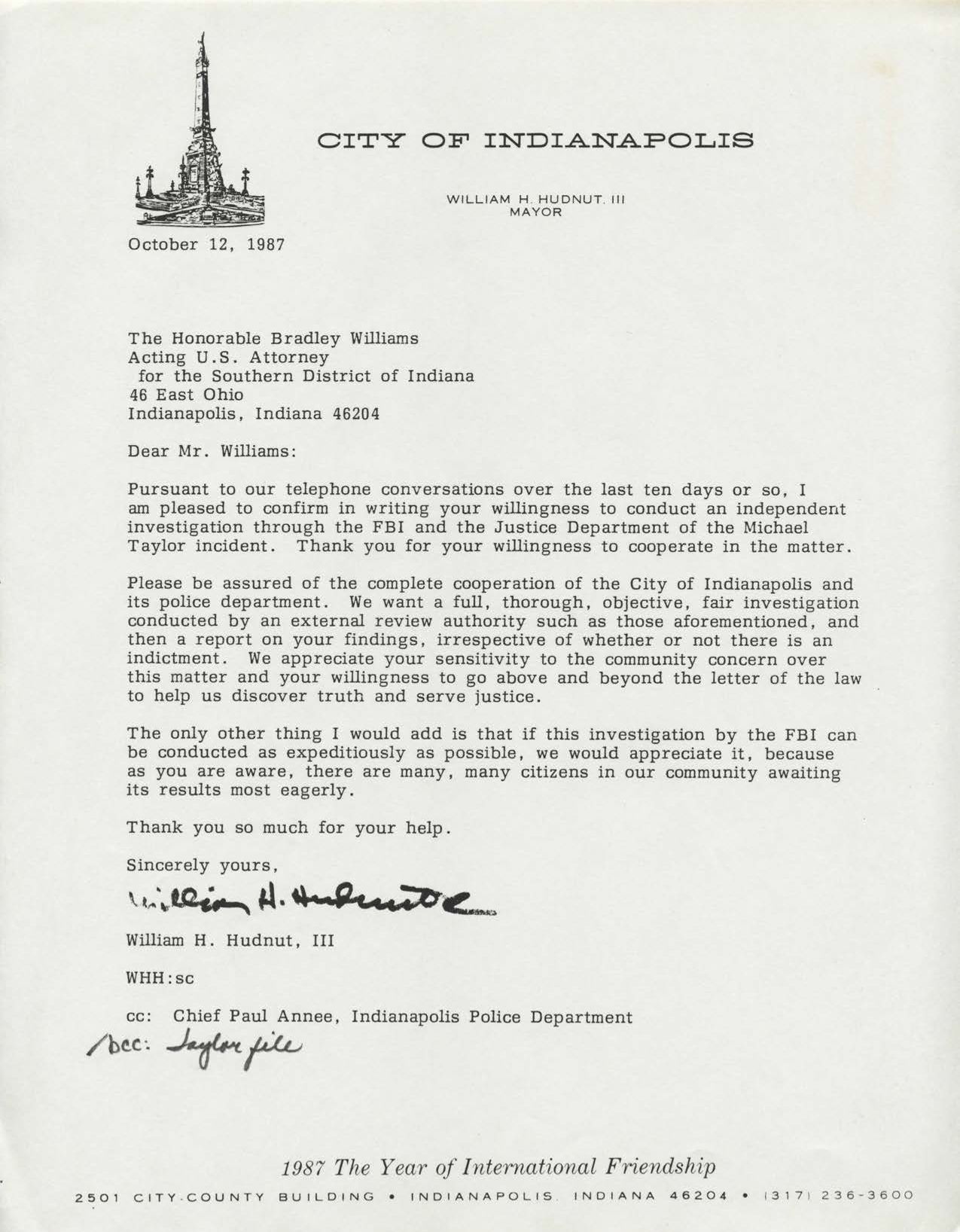 Mayor Hudnut writes to Brady Williams, Acting U.S. District Attorney for the Southern District of Indiana, to confirm his willingness to conduct an independent investigation into the shooting death of Michael Taylor through the FBI and the Justice Department. 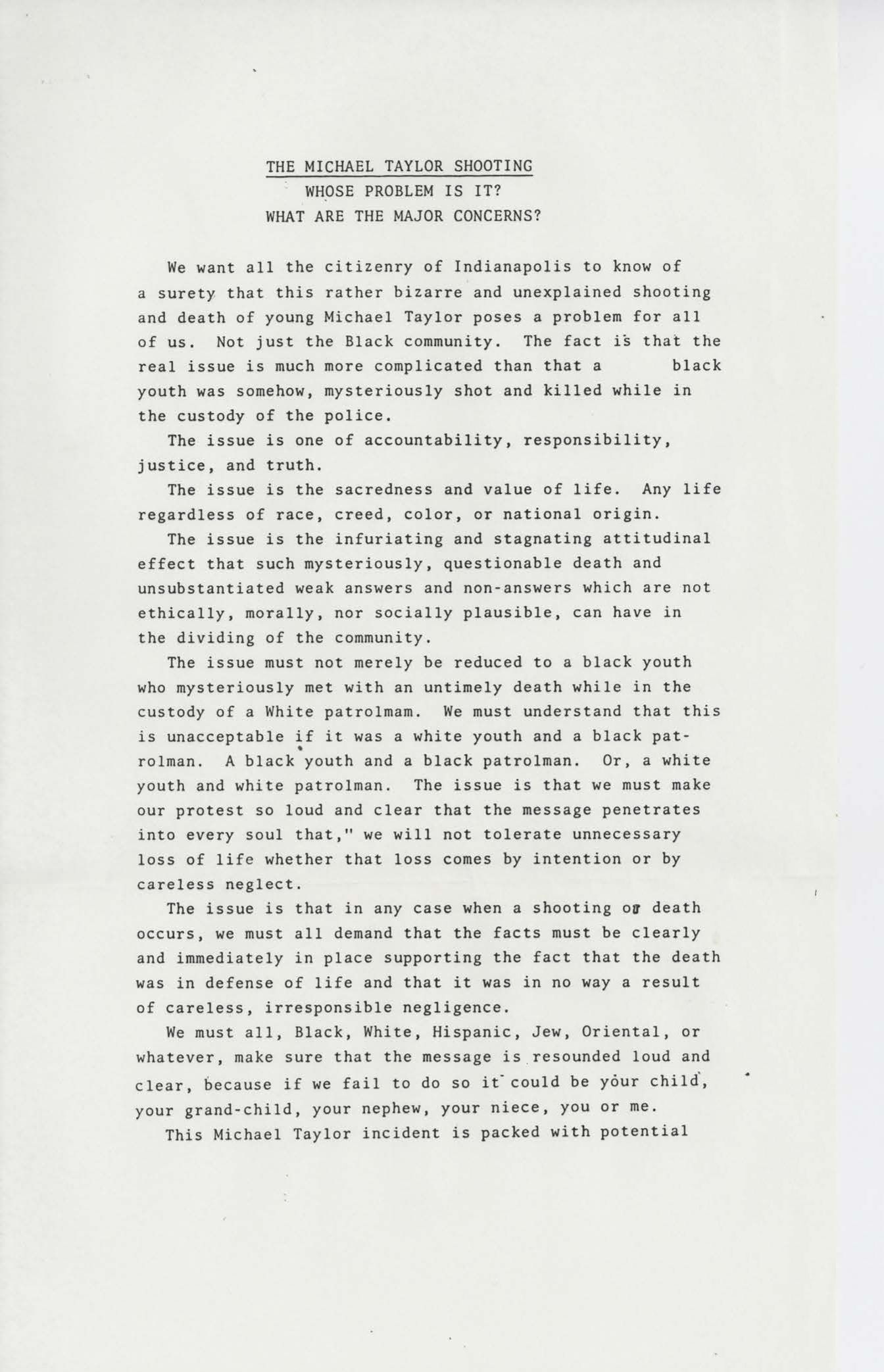 The Michael Taylor Shooting: Whose Problem Is It?

This statement from an unidentified group of citizens discusses the major concerns of the Michael Taylor shooting and insists that the incident poses a concern to all citizens, not just the African American community. 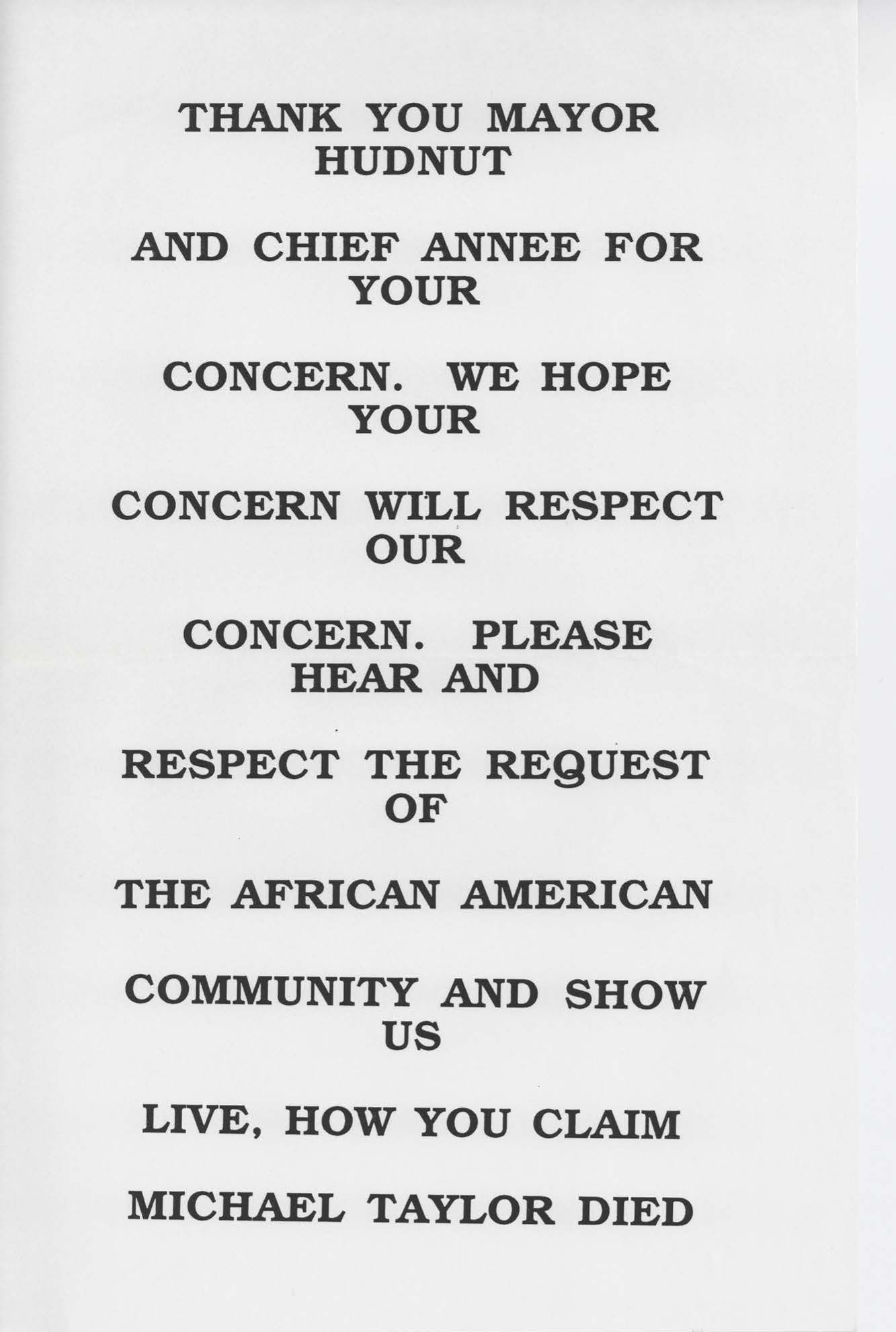 A request from the African American community of Indianapolis for Mayor Hudnut and IPD Chief Paul Annee to show how Michael Taylor died. 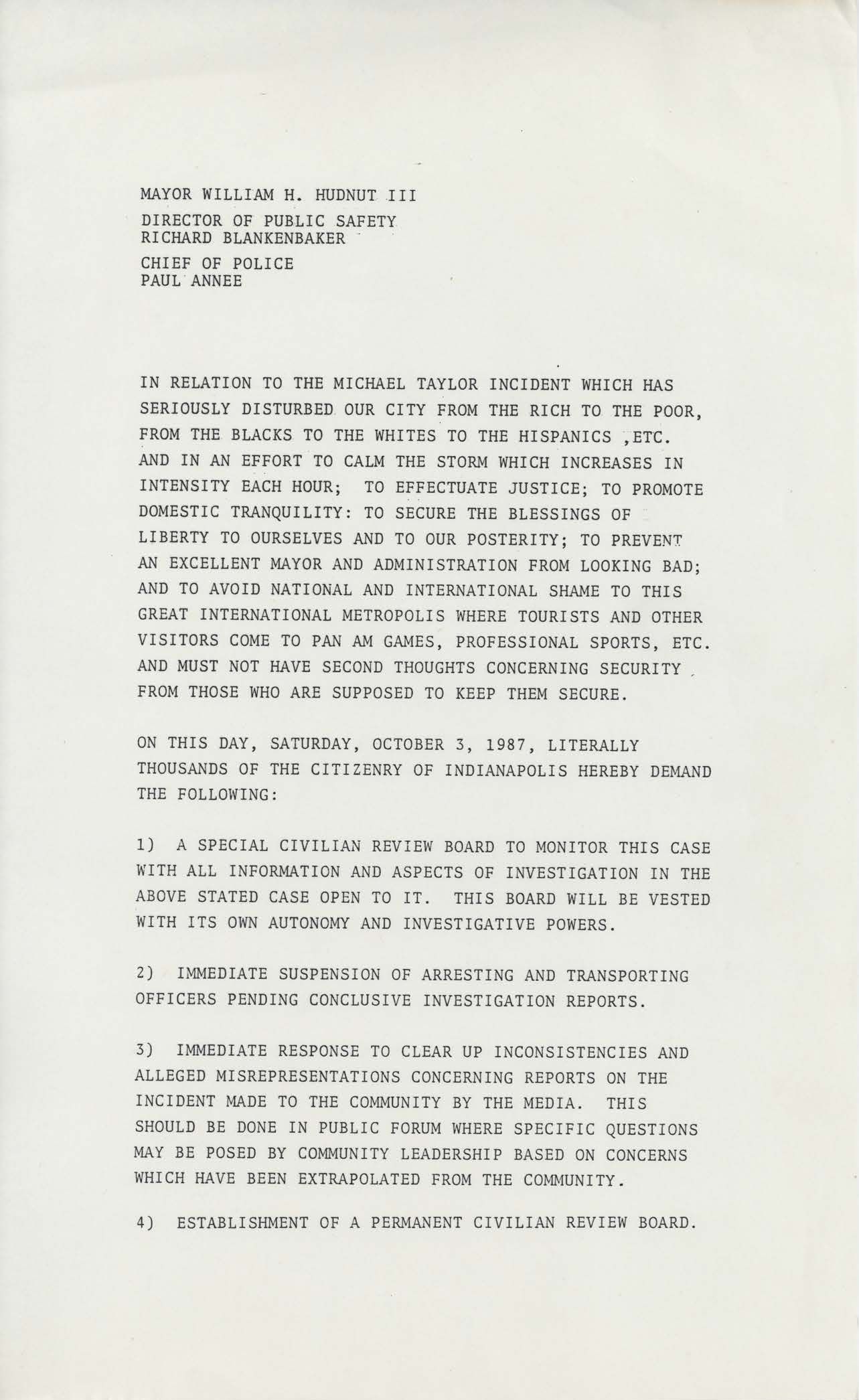 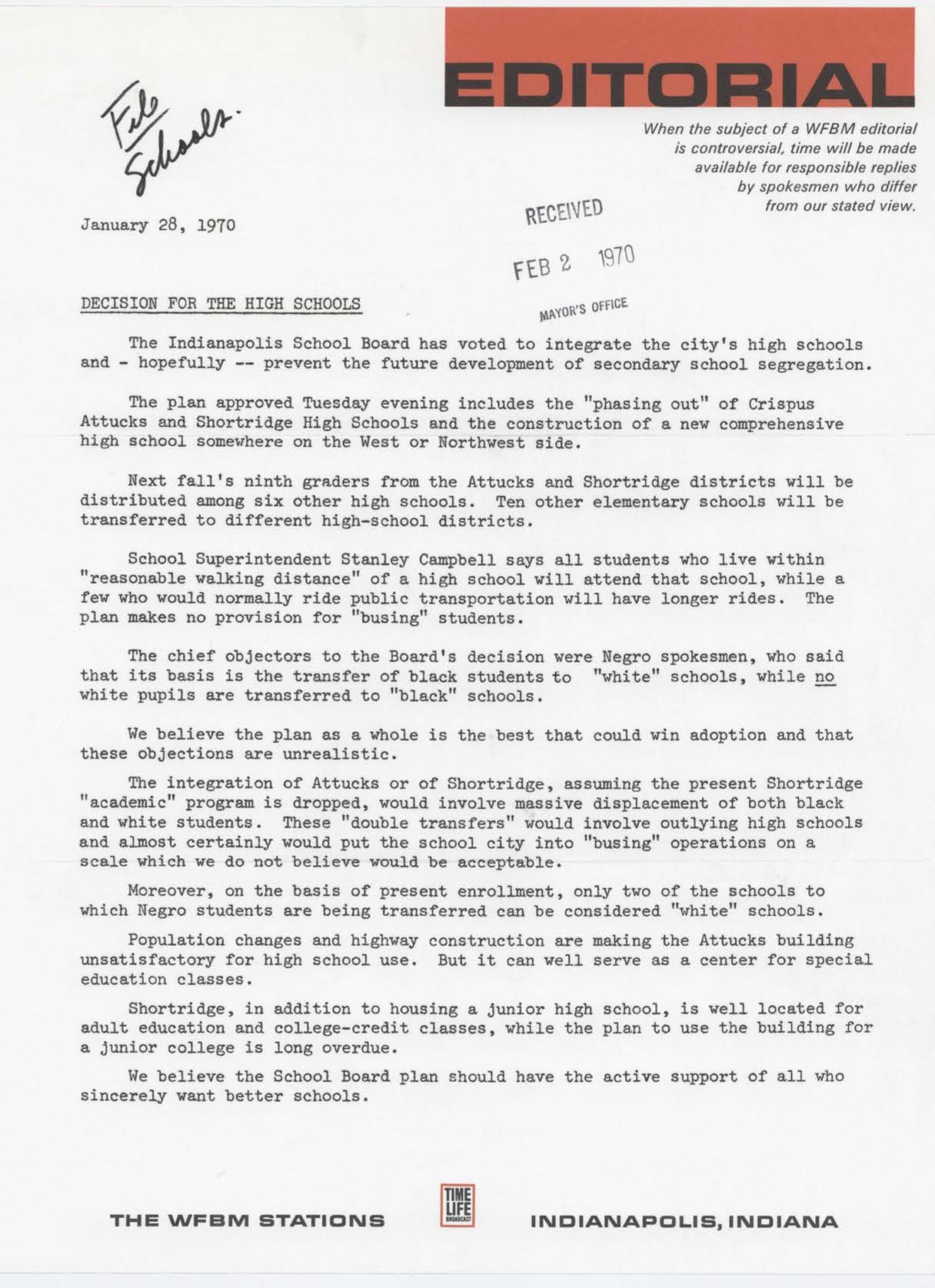 This WFBM editorial discusses the plan approved by the Indianapolis School Board to integrate the city's high schools. The editorial board comes out in favor of the integration plan but also acknowledges some of the chief objections to the plan. 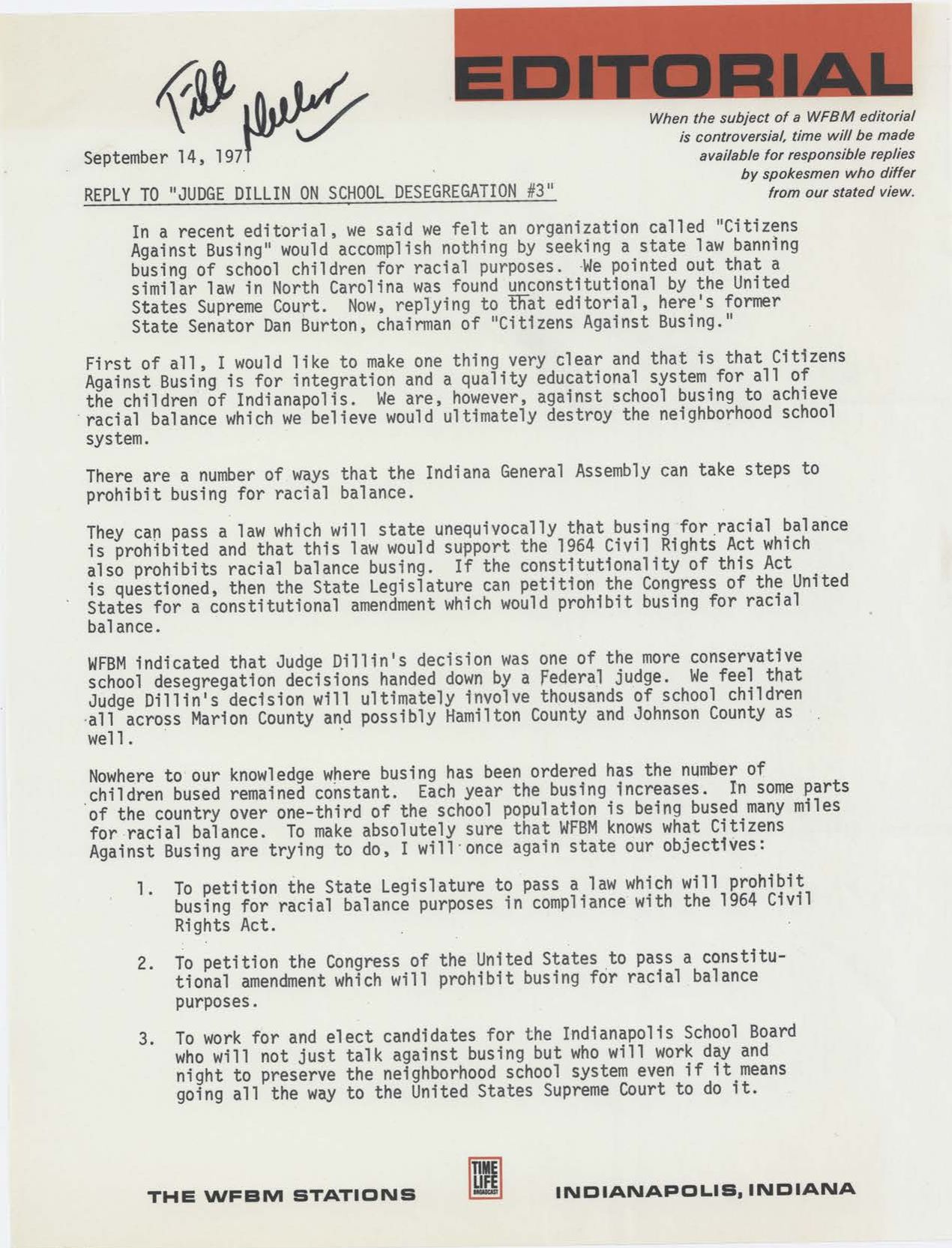 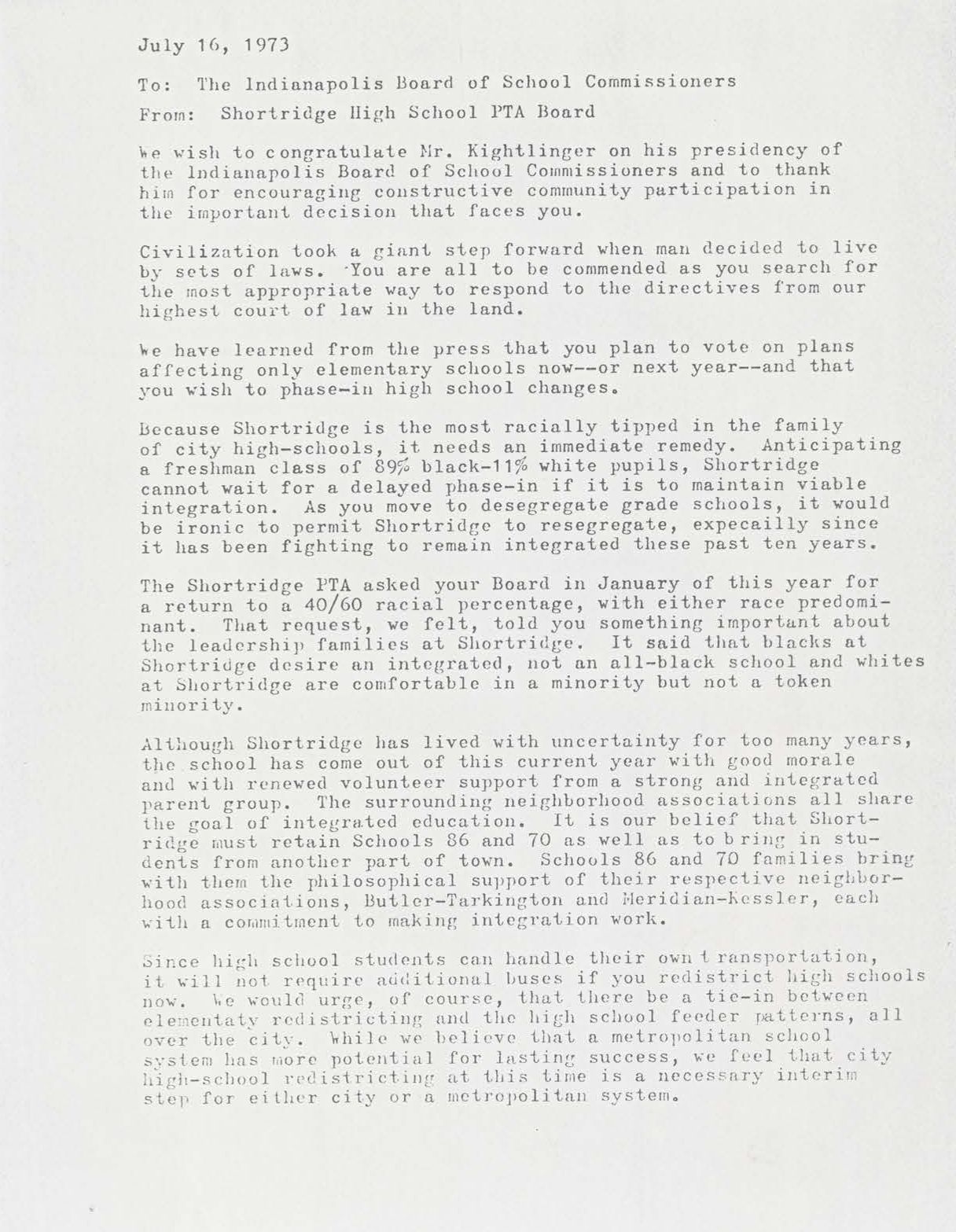 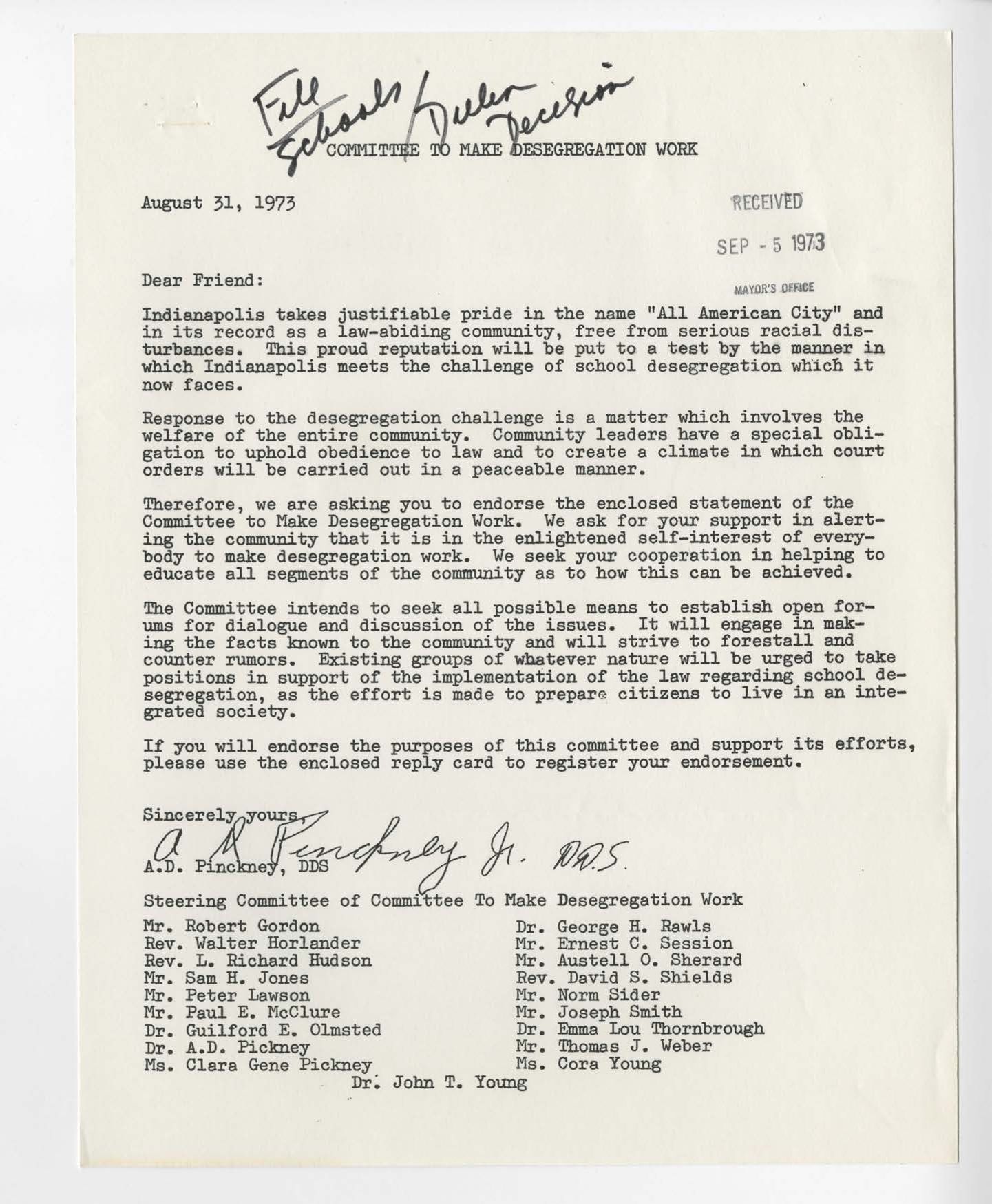 Pinckney writes that Indianapolis' reputation for being free from serious racial issues is being put to the test by the challenge of school desegregation. He asks for the recipient's support in ensuring the desegregation plan outlined by the courts is implemented in a peaceful manner.