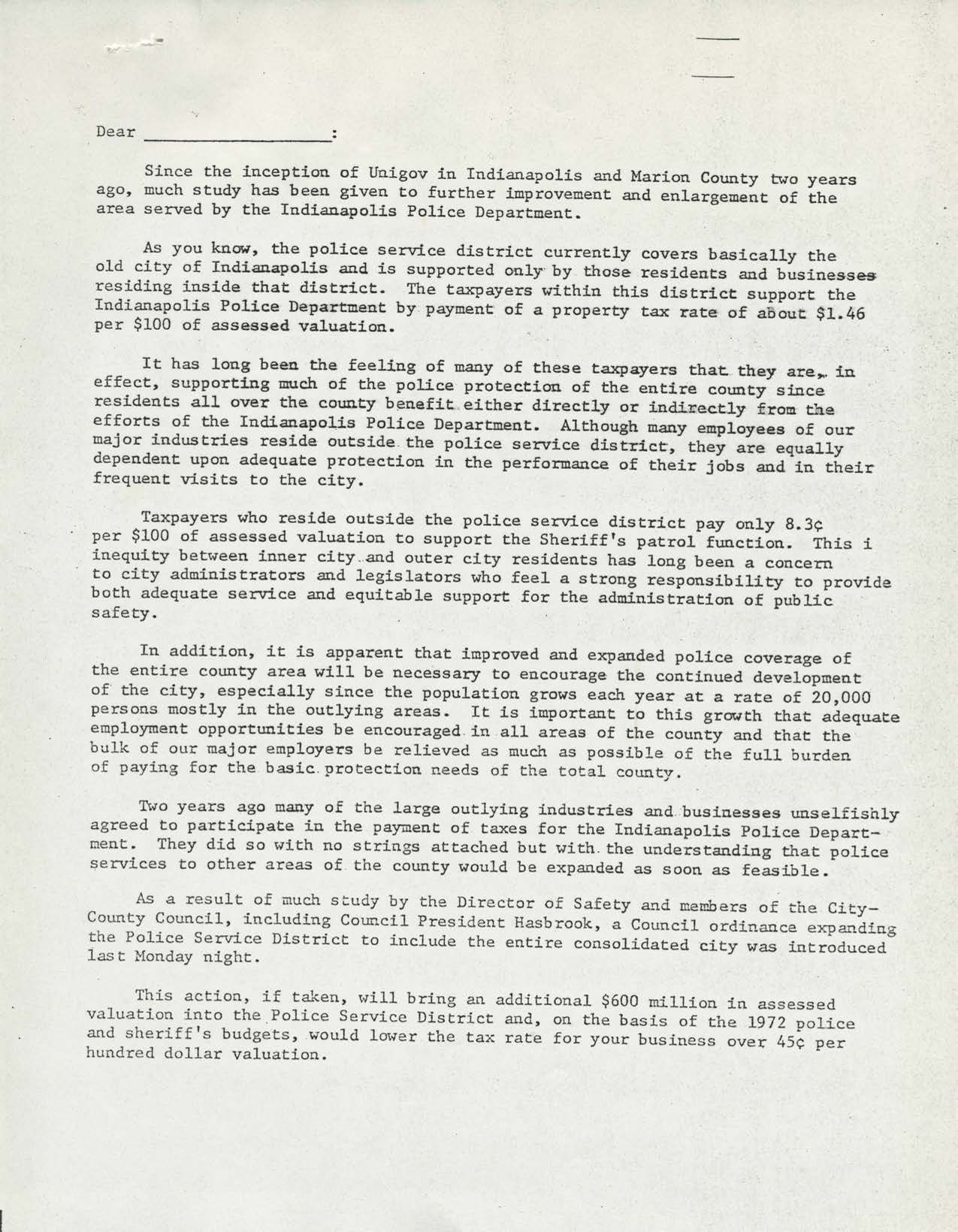 In this draft of a letter to area businesses, Mayor Lugar discusses the continued effort after the implementation of UniGov to consolidate city and county police services, an effort that proved to be controversial. 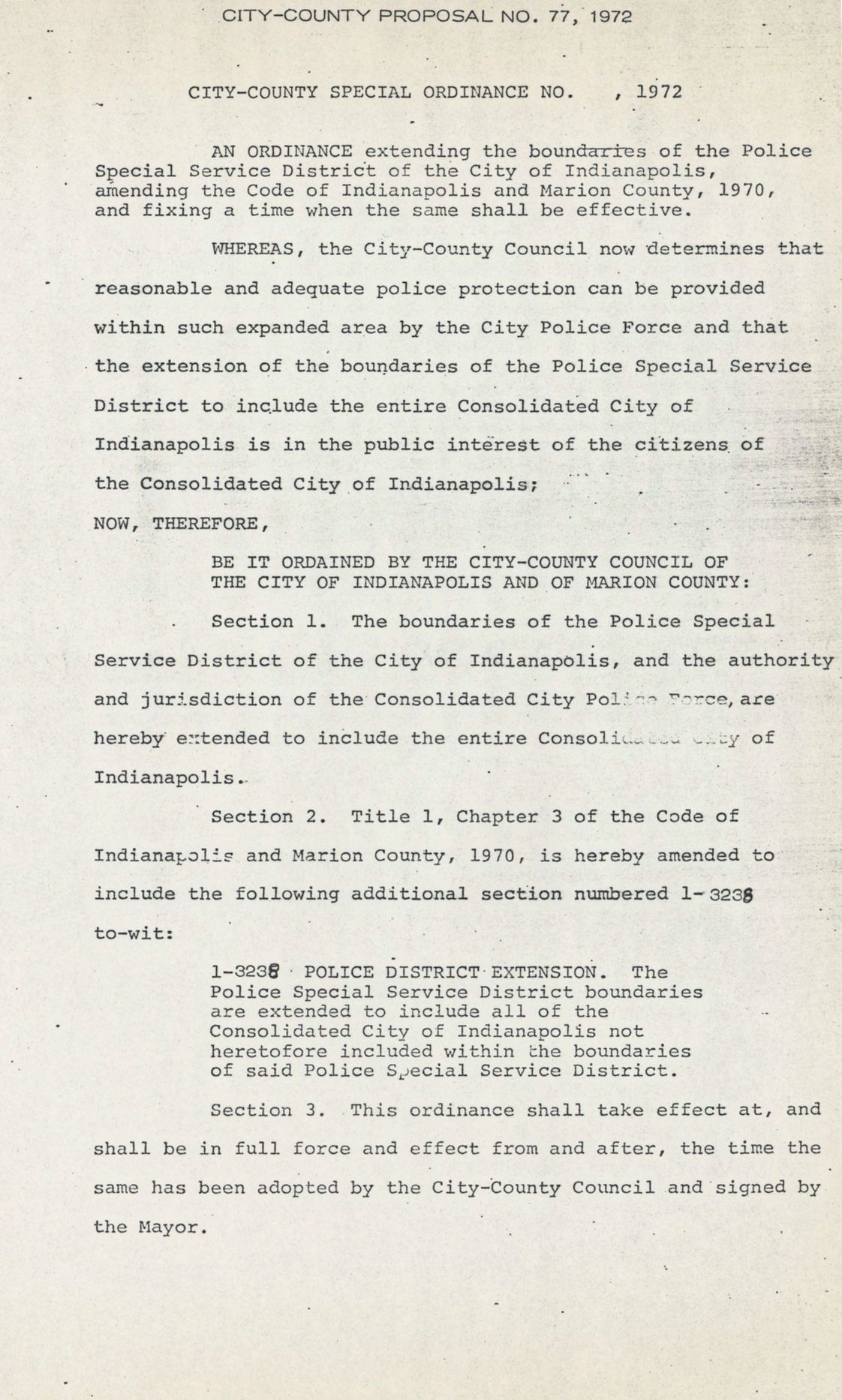 A proposed ordinance to extend the boundaries of the Indianapolis Police Department to include the entire Consolidated City of Indianapolis. The 1972 proposal did not pass. 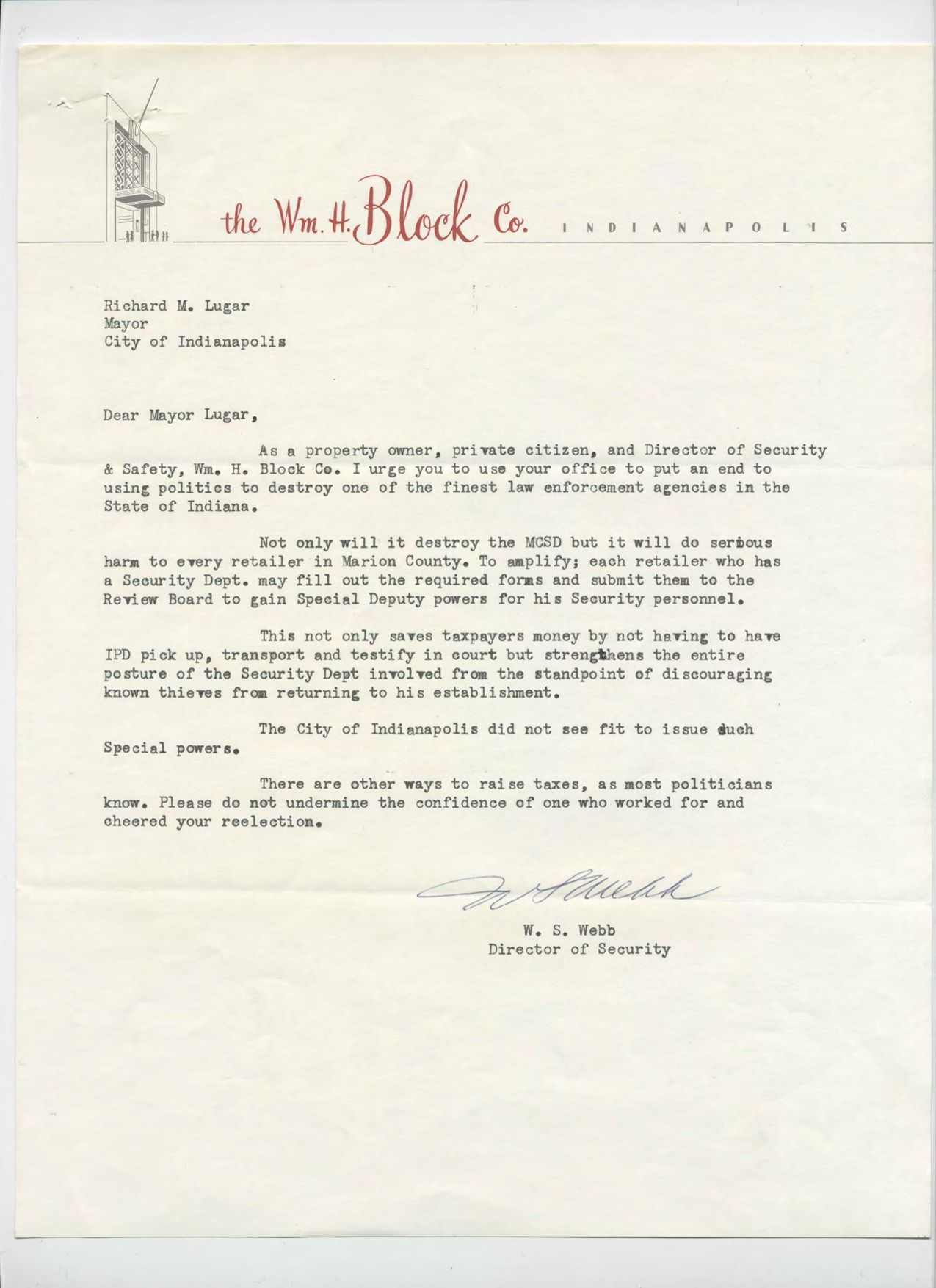 A letter from a citizen in opposition to the consolidation of police forces. 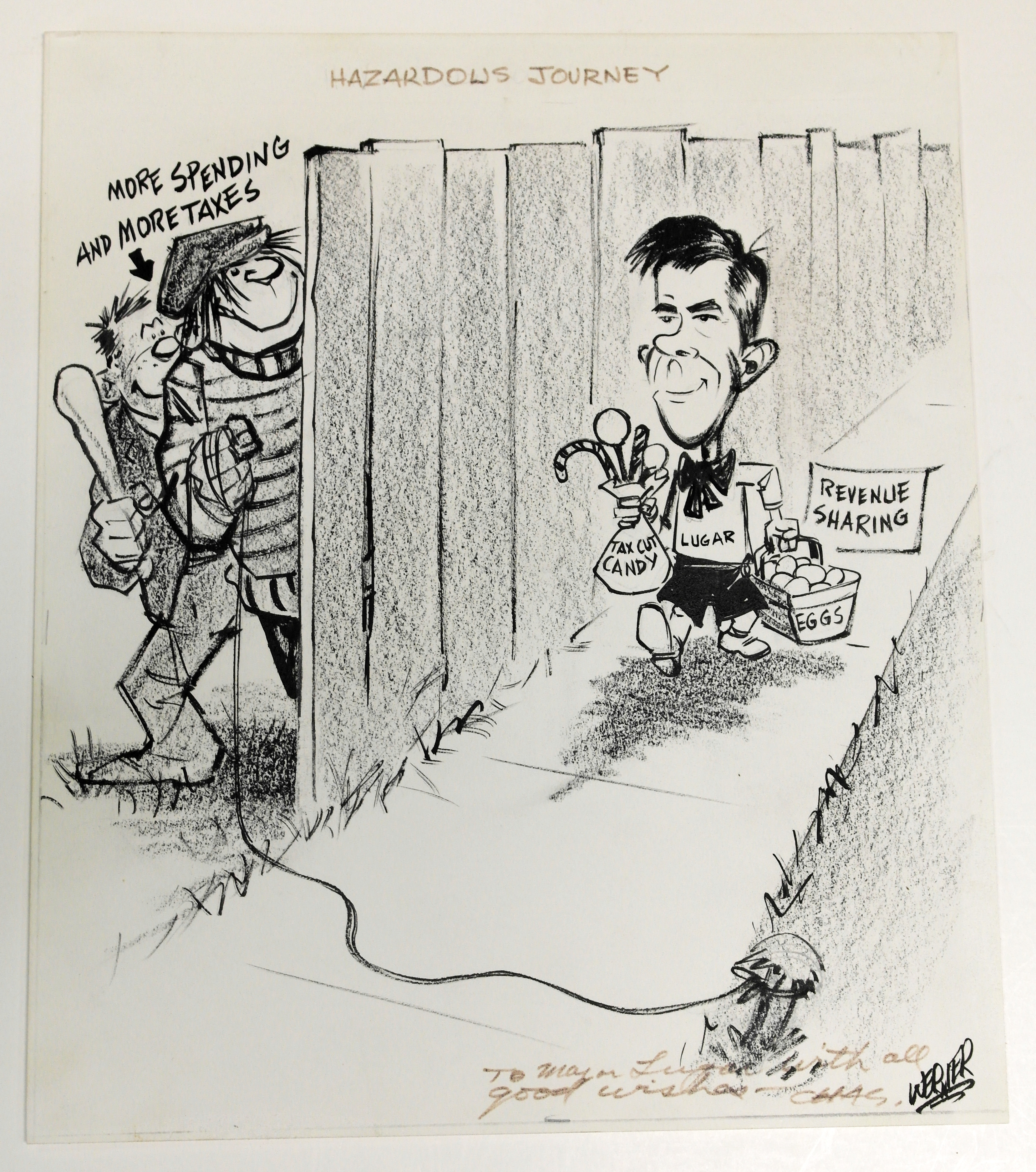 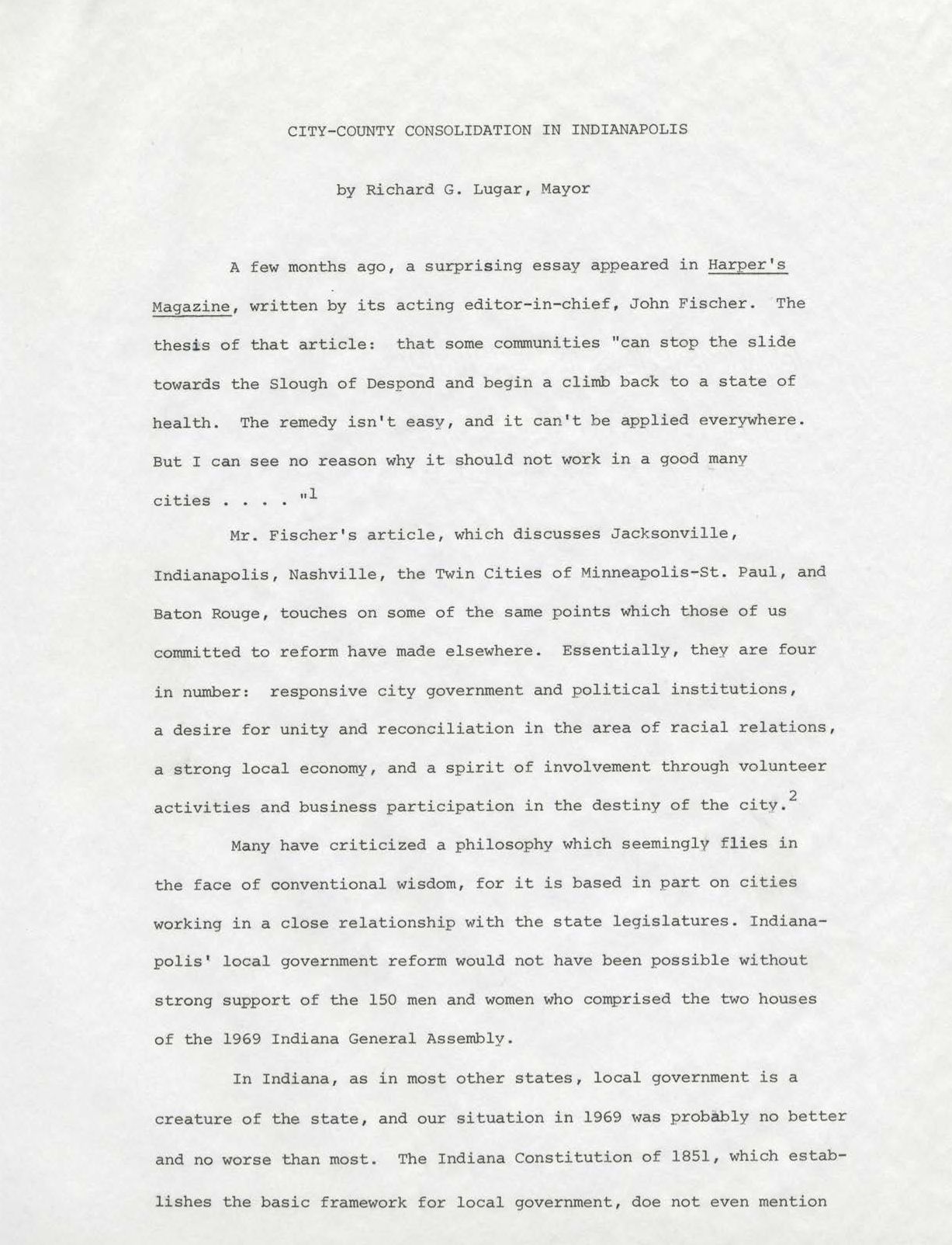 In this speech, Mayor Lugar addresses the question of city-county consolidation in Indianapolis and, of particular interest, provides an explanation as to why he felt consolidation should take place without a referendum. 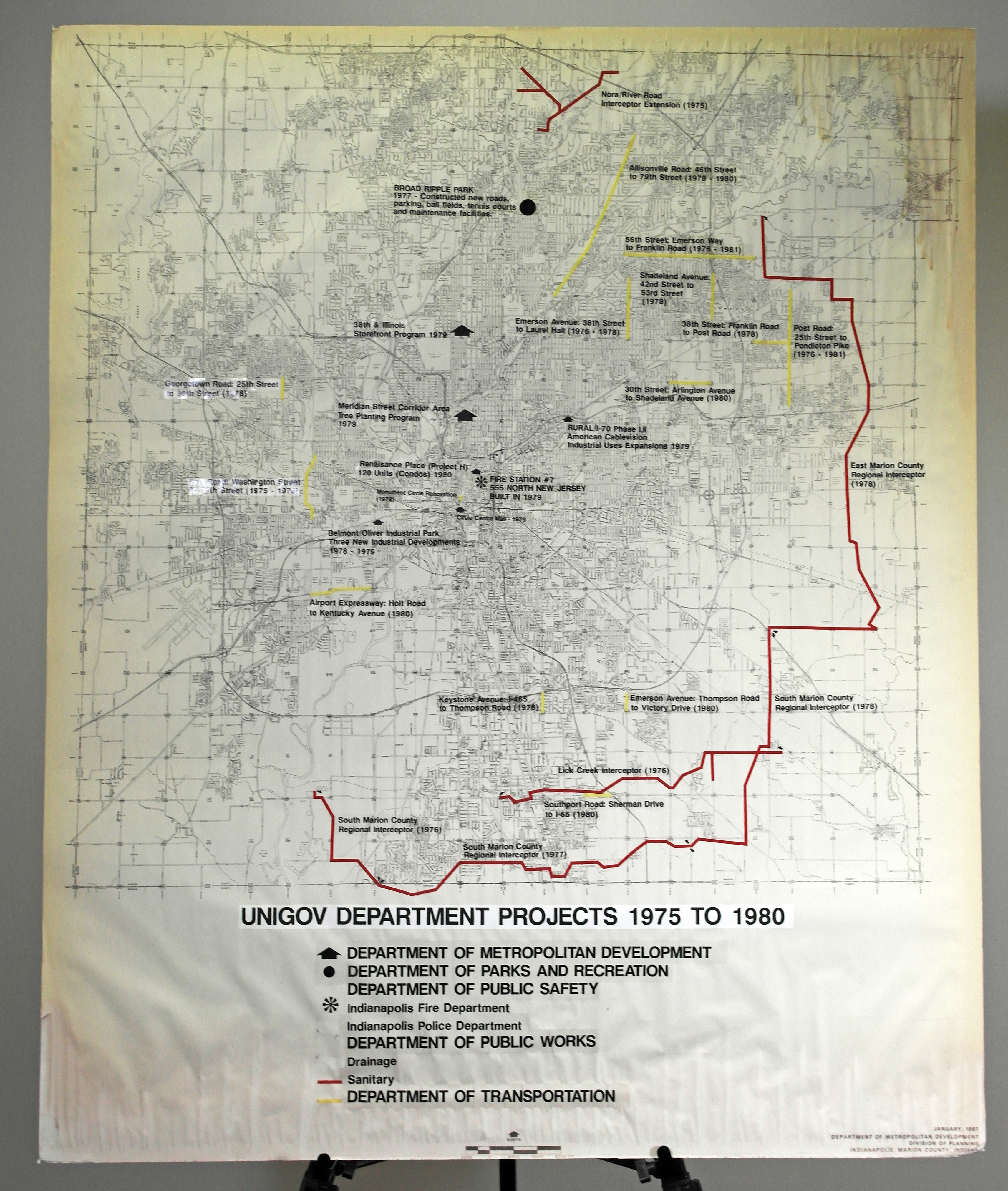 This poster highlights UniGov projects for each department in the late 1970s. 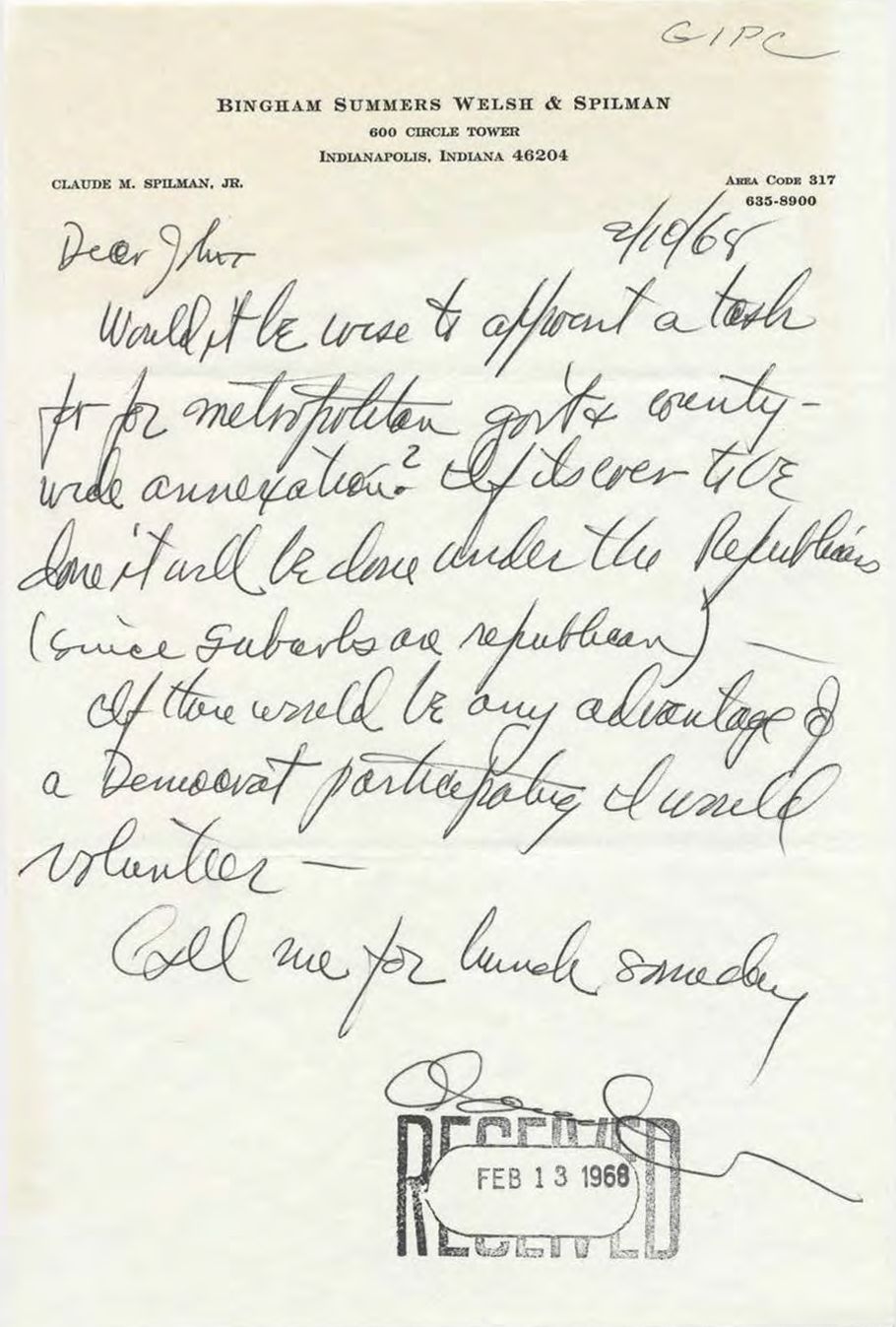 In this letter, Claude Spilman, a member of the Greater Indianapolis Progress Committee (GIPC) encourages the Lugar administration to set up a task force to consider consolidating the city and county government. Although a Democrat, Spilman acknowledges that it is Republicans who stand to benefit most from consolidation. 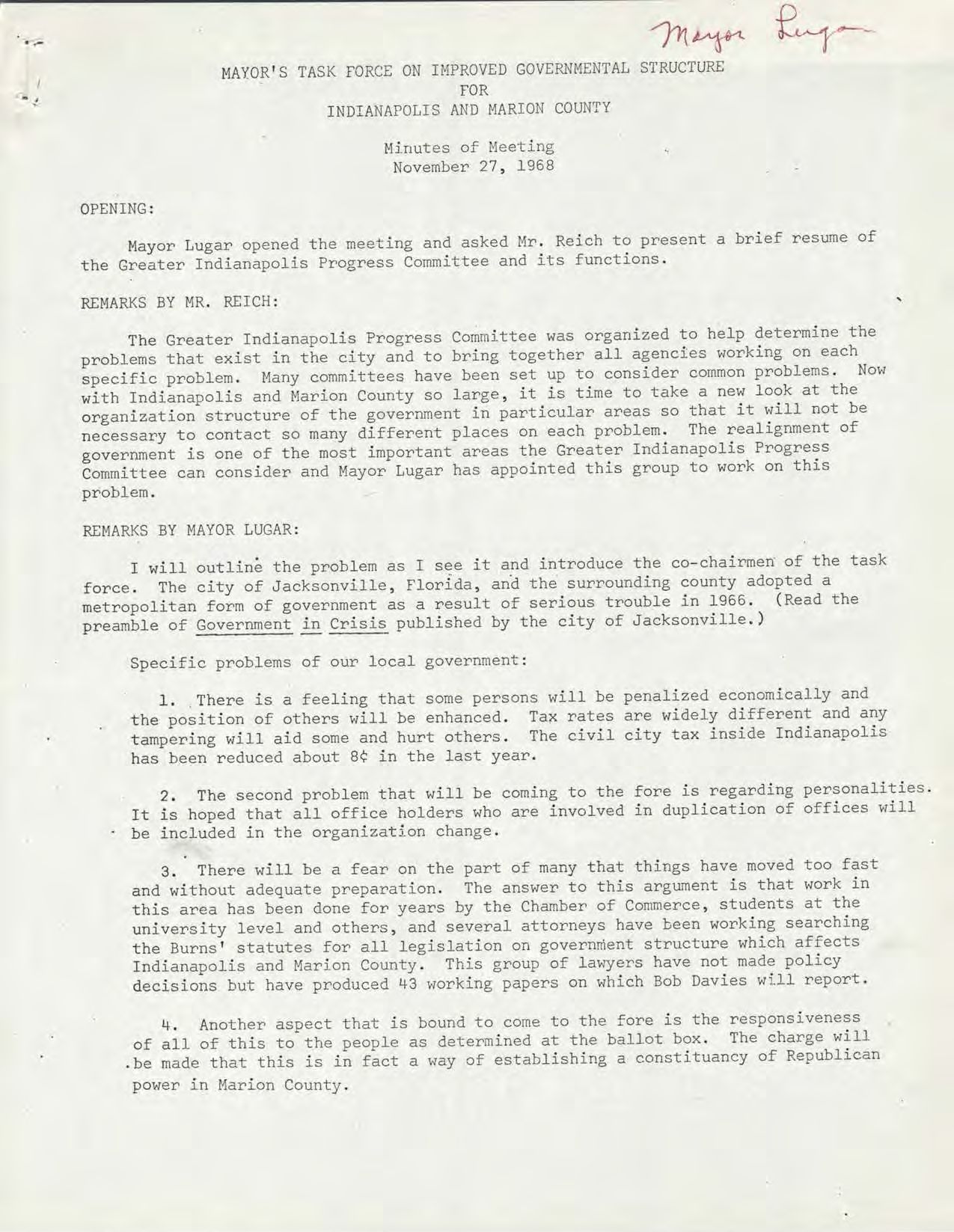 In late 1968, Mayor Lugar formed a task force within GIPC to analyze the concept, policy, and strategy of government consolidation. These minutes from an early task force meeting demonstrate the extensive thought and planning that had gone into consolidation, including exploring the adoption of a consolidated government two years before in Jacksonville, Florida, justifications for consolidation, and the suggestion to exclude the towns of Lawrence, Speedway, and Beech Grove from consolidated Indianapolis. 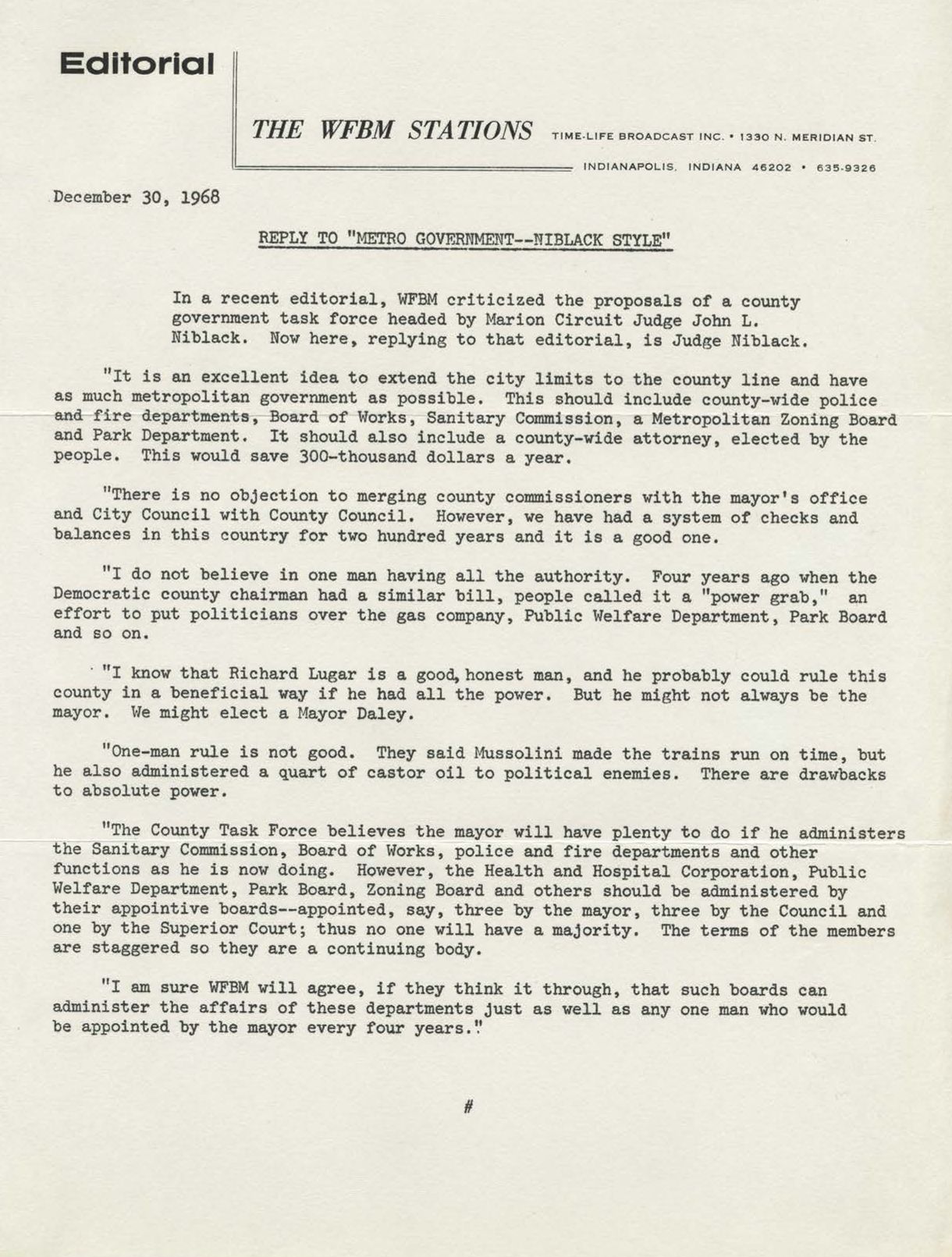 Judge John L. Niblack replies to a recent WFBM editorial about UniGov. Niblack warns that, while Lugar is a good man, absolute power and one-man rule is a slippery slope and could result in the election of someone like then-Chicago mayor Richard J. Daley. 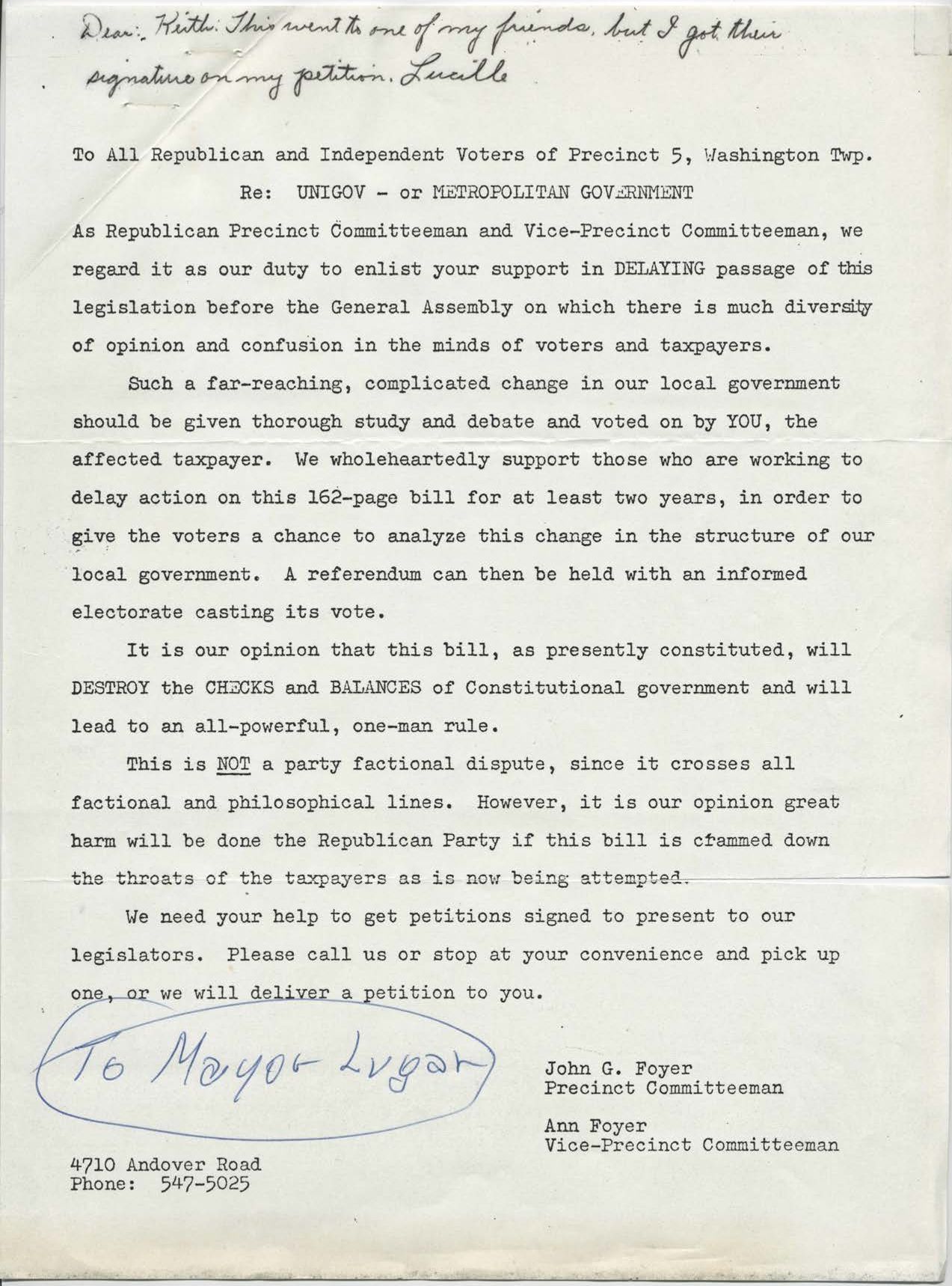 Rather than a state constitutional amendment or local referendum, advocates of UniGov sought to pass the measure through legislation in the Indiana General Assembly. This letter to Washington Township voters outlines opposition to UniGov and calling for delaying the legislation. 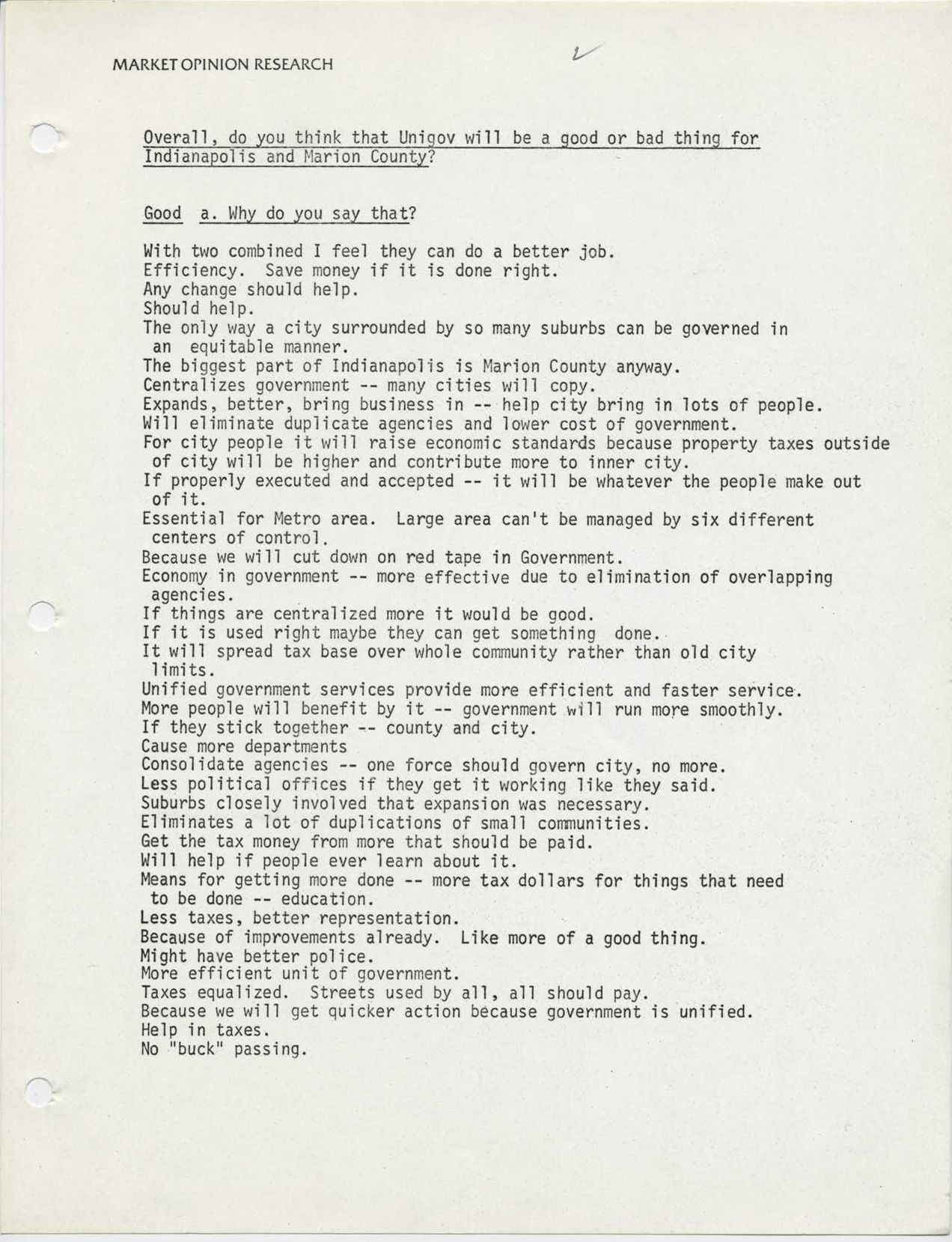 Examples of citizen's responses to a poll about their support or opposition to UniGov and their opinion on Mayor Lugar. 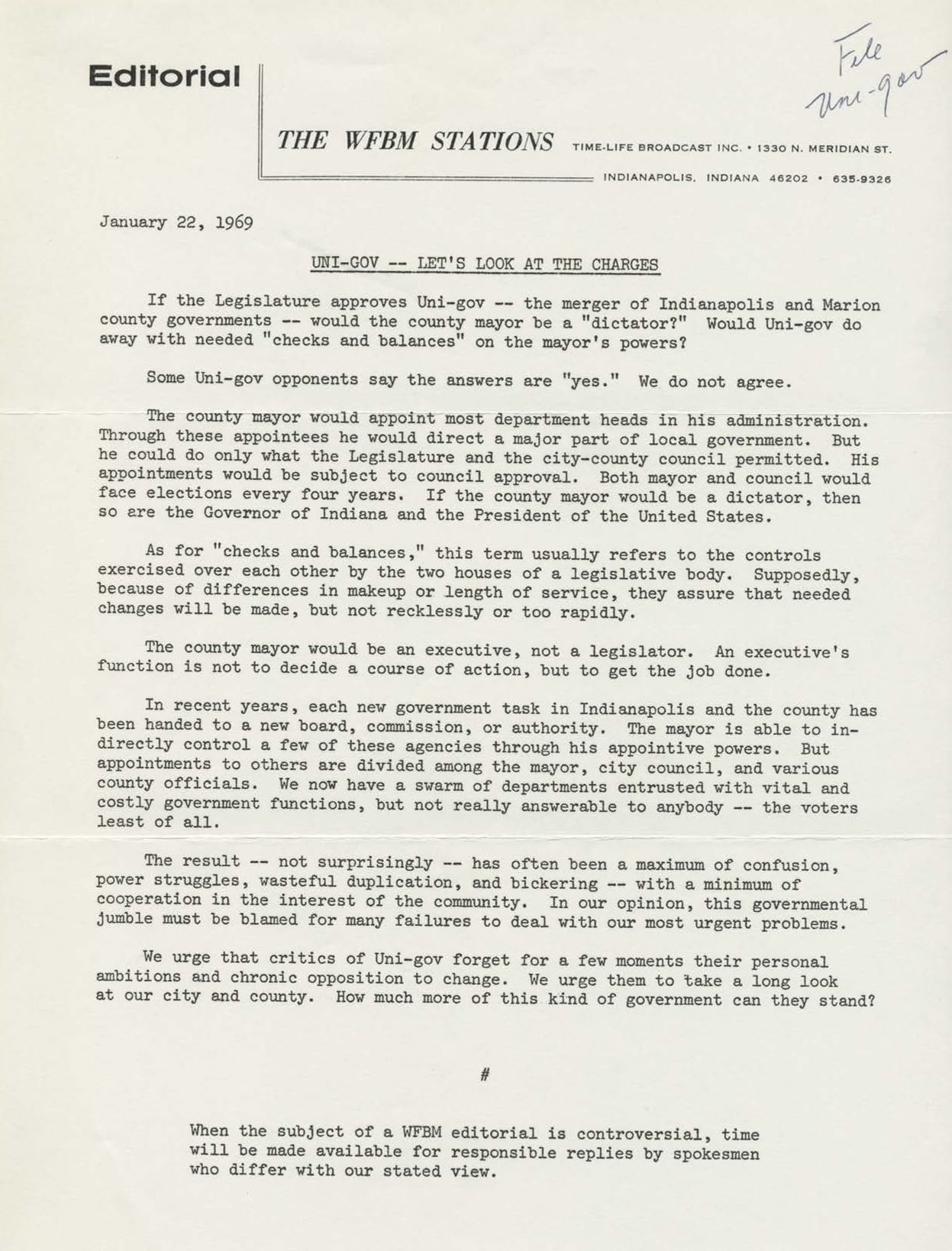 An editorial by WFBM comes out in support of UniGov and tackles some of the questions surrounding the legislation. 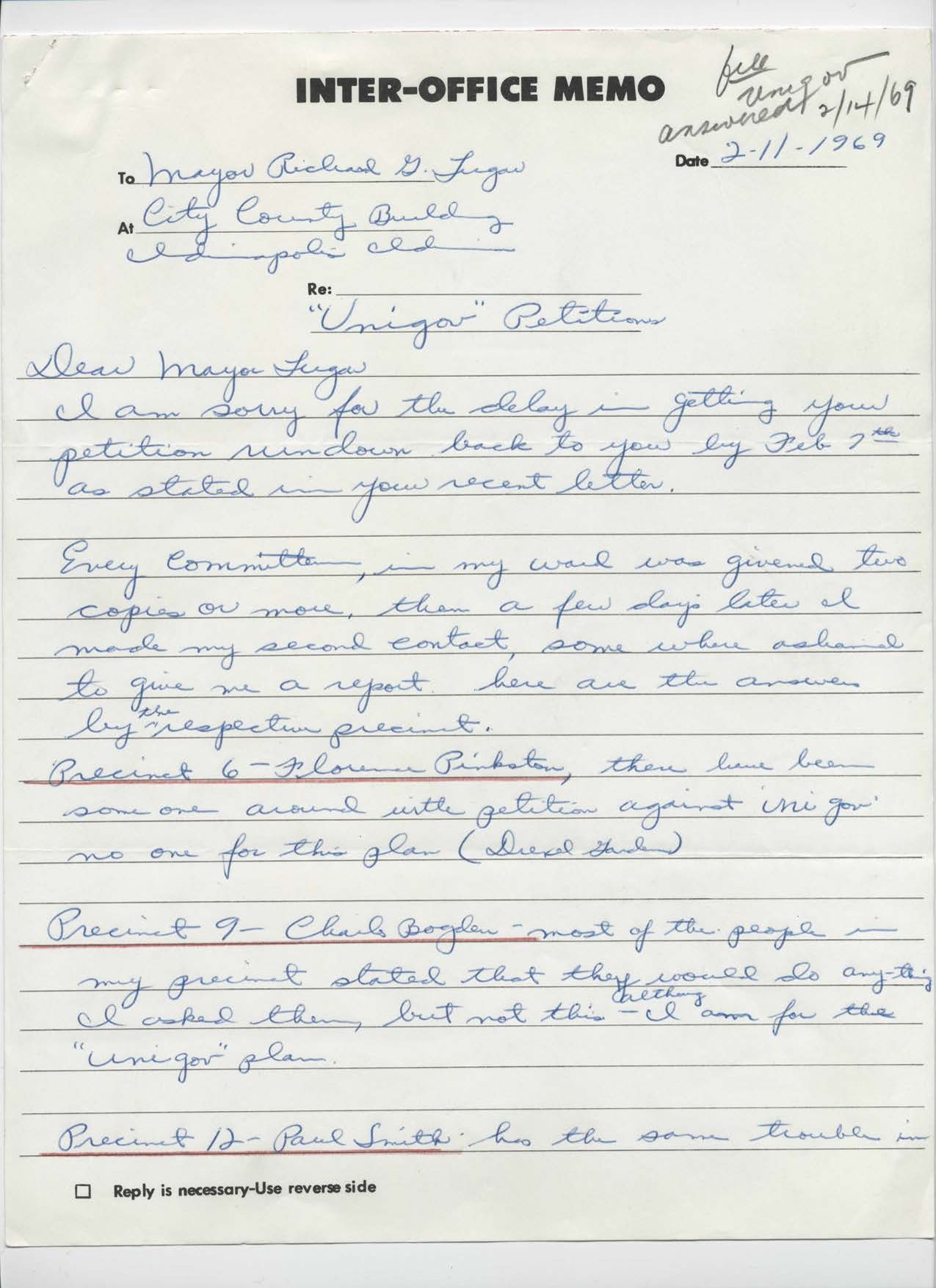 In this letter, Charles Bogden, Committee and Ward Chairman of Wayne Township, reports little voter support for UniGov among his constituents. 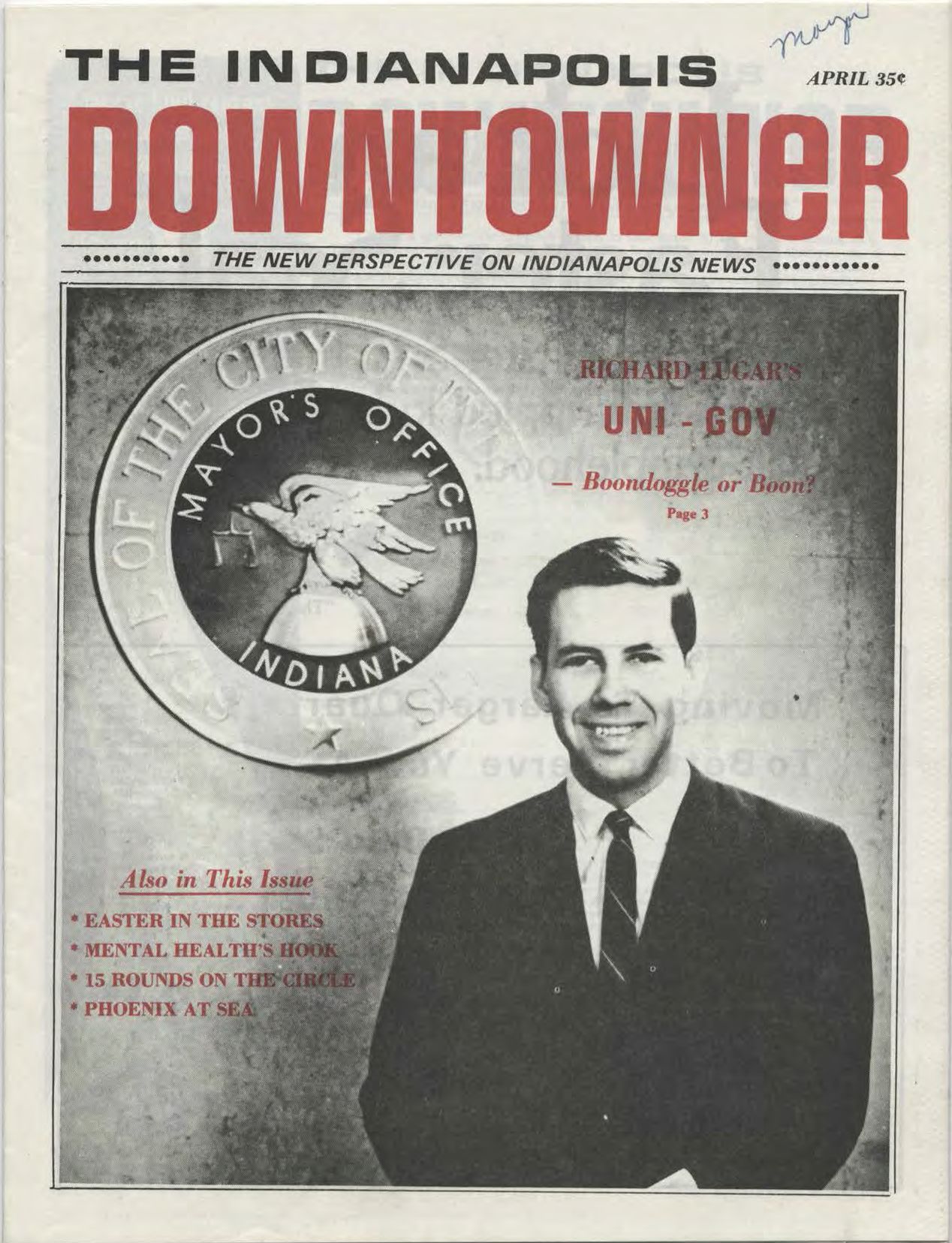 The Indianapolis Downtowner explored the newly enacted UniGov system in its April 1969 cover story. The article praises the concept and outlines its benefits but also explores the arguments against the system and raises questions of the constitutionality of its provisions. 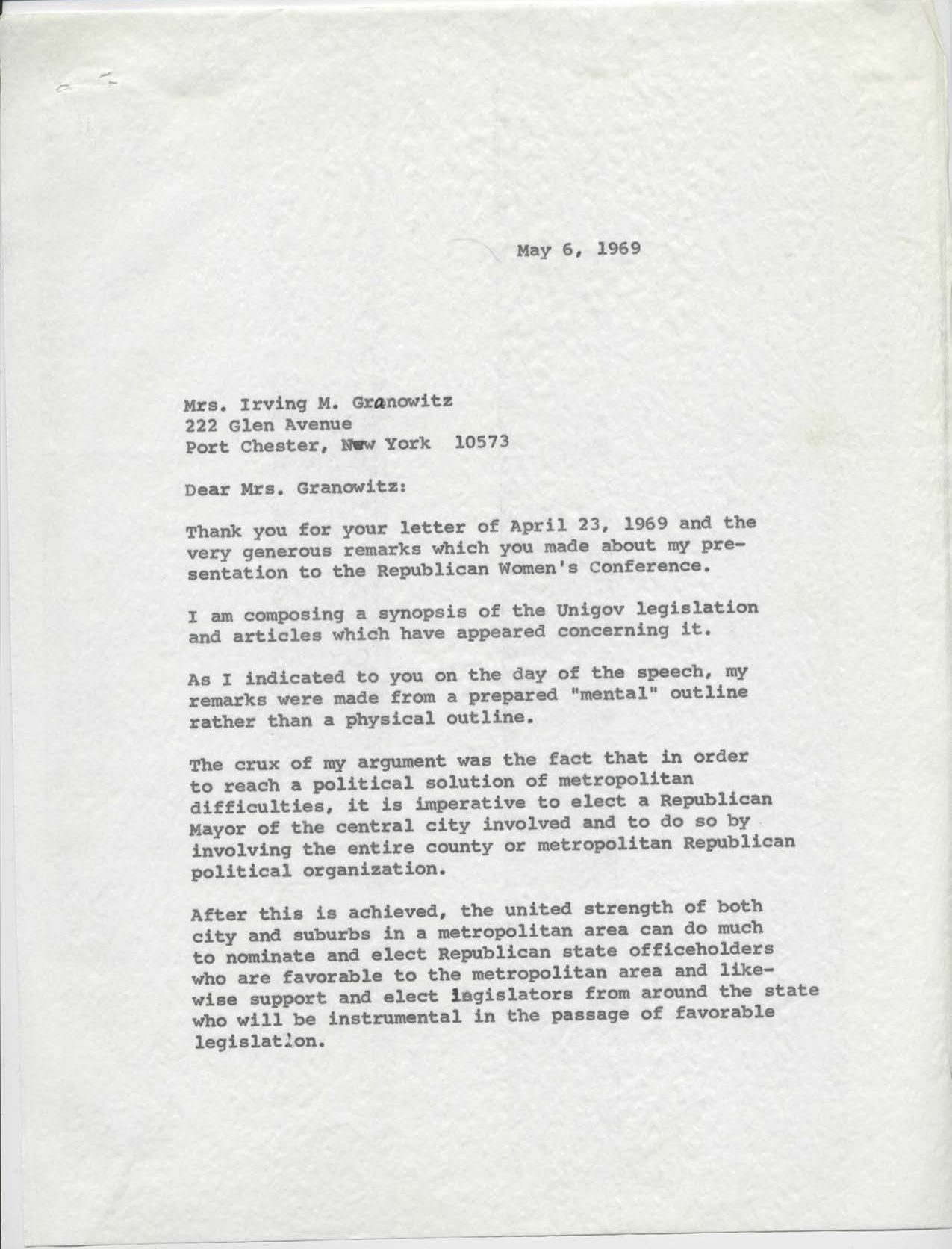 In this letter, Lugar writes to a woman in New York who attended a Republican Women's Conference where Lugar was a speaker. Lugar outlines his belief that only the Republican Party can make city-county consolidation possible.

Arthur Thomas, a resident of Speedway, Indiana, criticizes several Indiana politicians, including Mayor Lugar. Thomas states that Lugar shoved UniGov on the county residents through pressure politics and that they are not adequately represented. 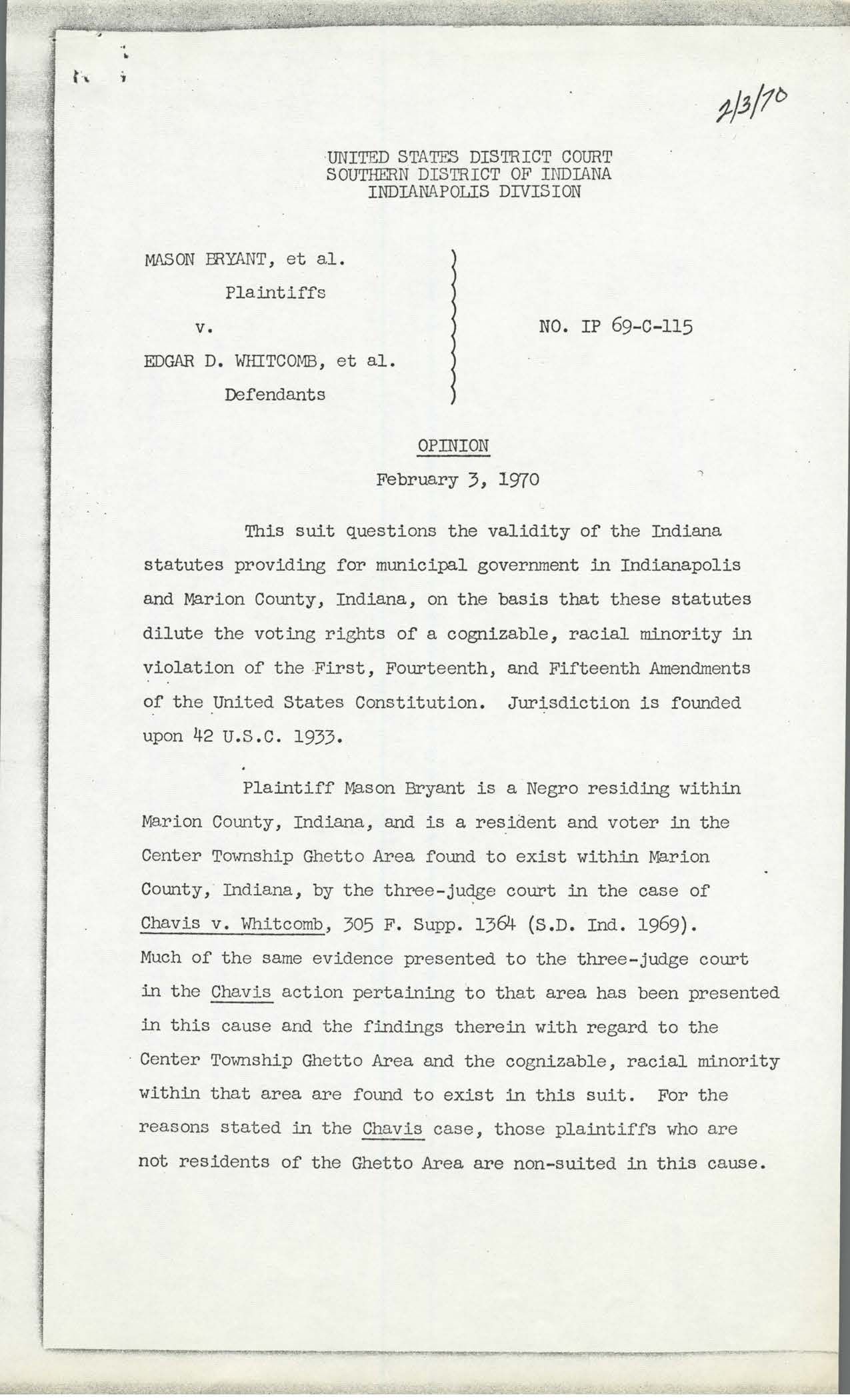 Opinion of the Southern District Court of Indiana, Indianapolis Division in a suit questioning the validity of the Indiana statutes allowing for UniGov. The court finds that the statues are constitutional, in favor of the UniGov system. 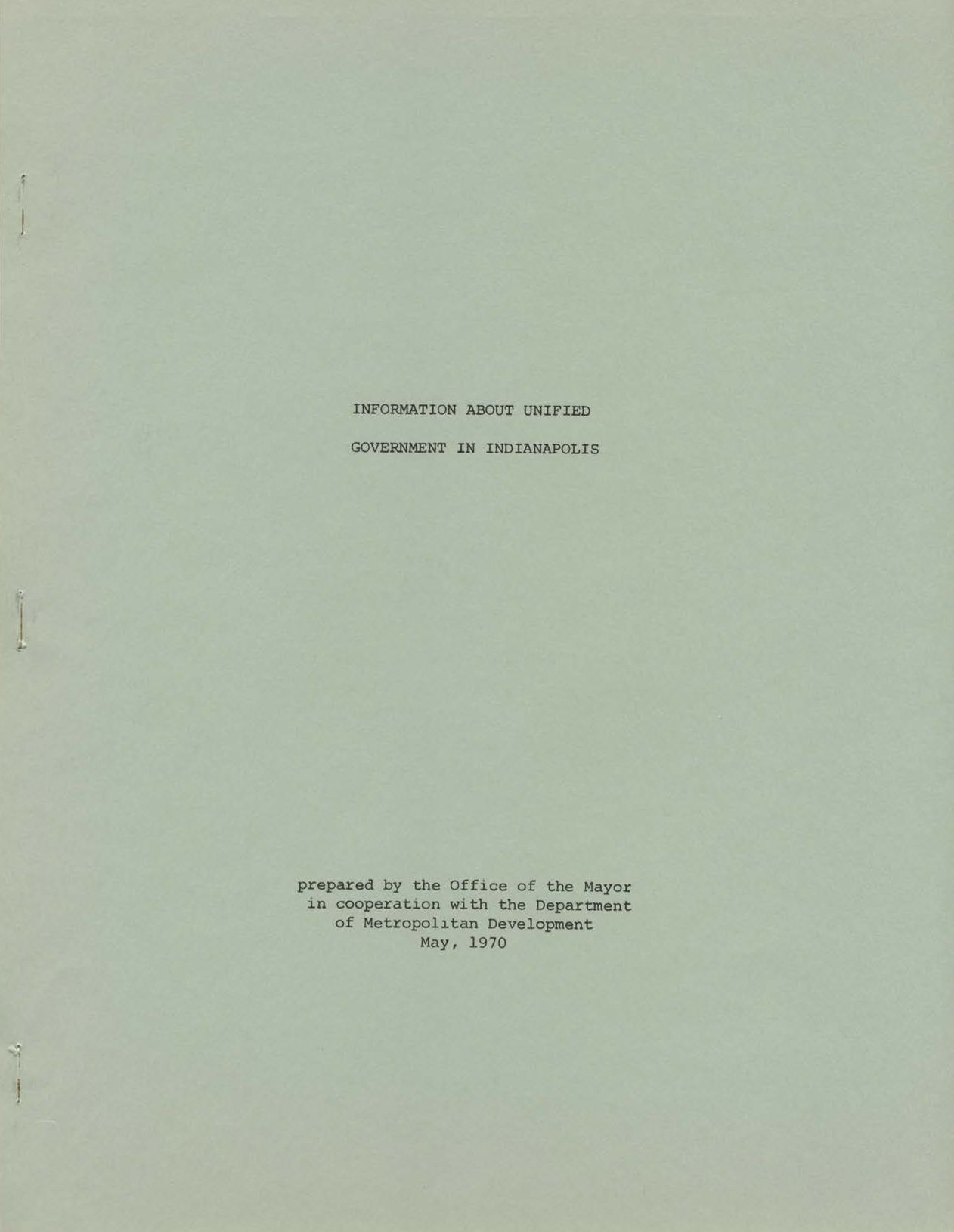 Information About Unified Government in Indianapolis, May 1970 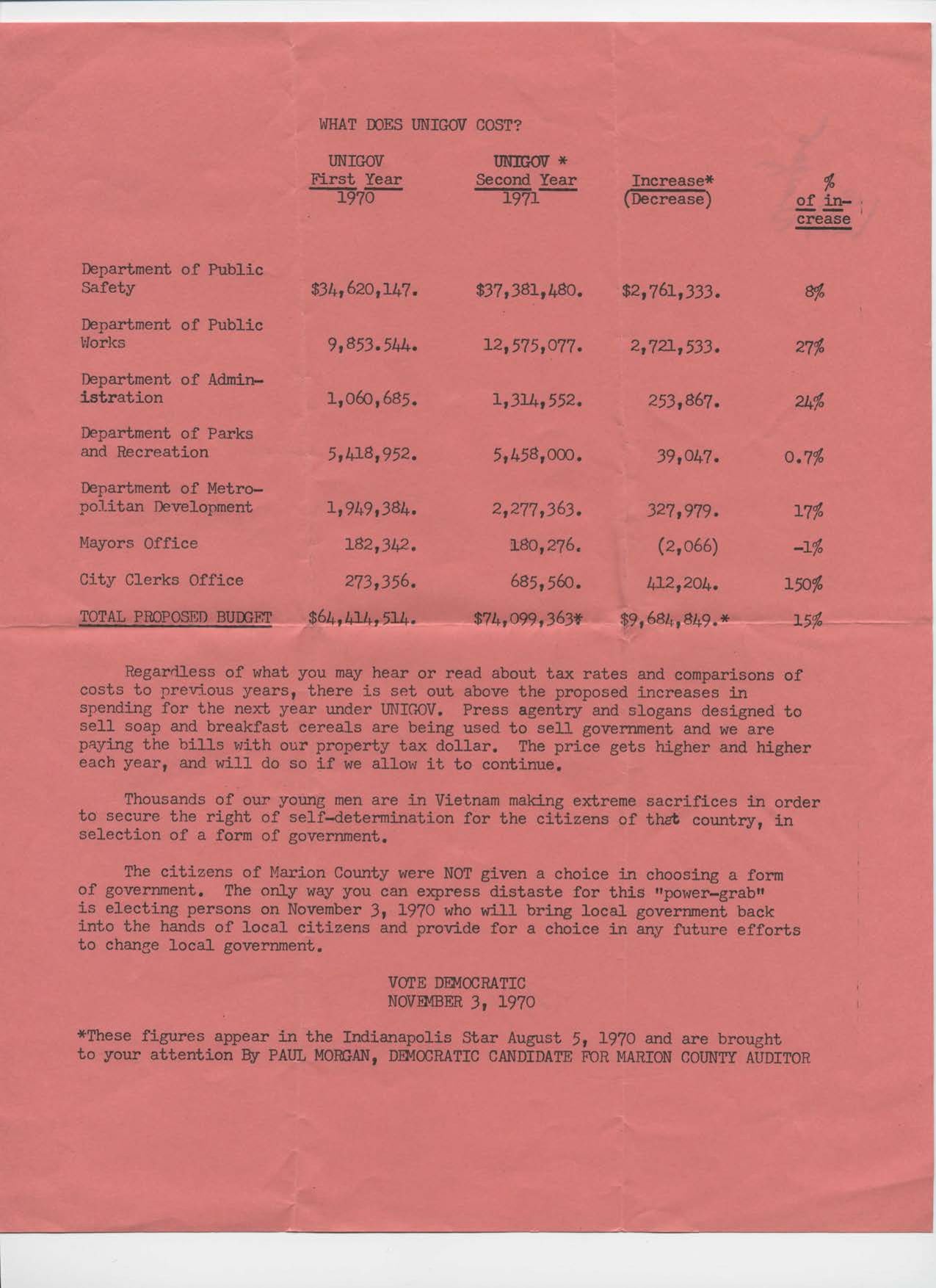 A flyer outlining the costs of UniGov and urging citizens to vote Democrat in response to the UniGov rollout. 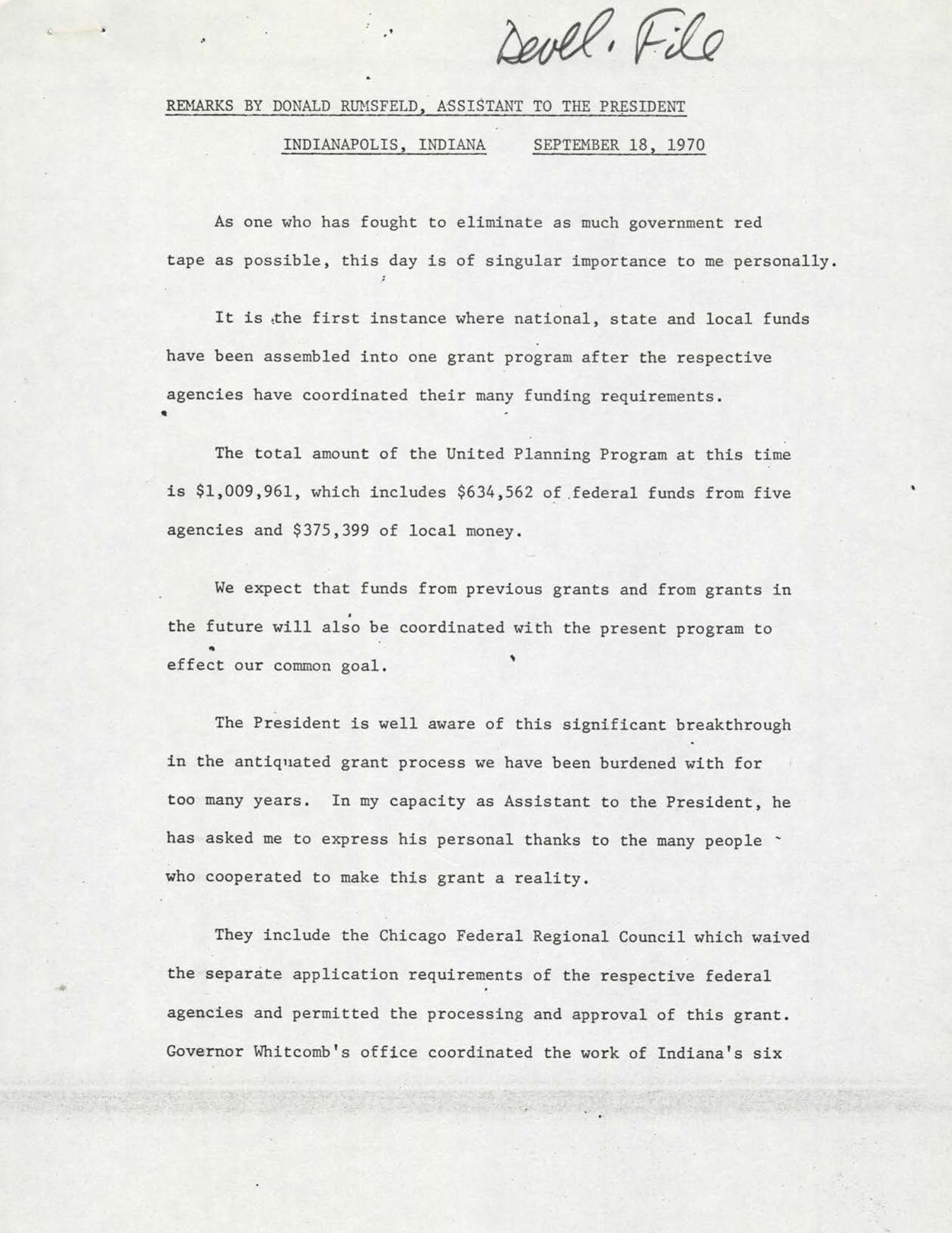 In this speech in Indianapolis on September 18, 1970, Donald Rumsfeld, then-Counsellor to President Richard Nixon, praised the UniGov system and the Unified Planning Program (a coordinated approach to planning and funding metropolitan development efforts) as emblematic of the philosophy of New Federalism, which sought to transfer decision-making and funding power from the federal government to the state and local levels.